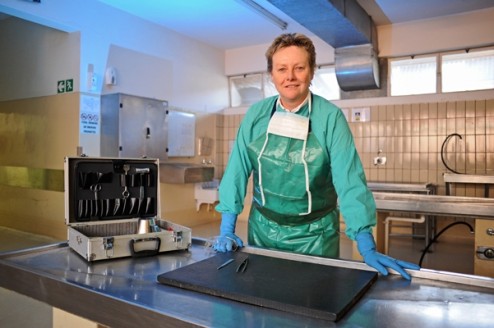 With the Western Cape carrying the highest burden of fatal Covid-19 cases, the City of Cape Town has been preparing for “an increased demand in burial spaces” and has called on the public to opt for cremation over burial, and to consider weekday funerals to avoid demand outstripping capacity on weekends.

Other SA cities are following the same guidelines, but another potential challenge is body storage: what happens to the body of a person who died of Covid-19 before they are buried or cremated?

Last week, epidemiological modellers predicted that 40,000 South Africans would die of Covid-19 by November this year.

In March, the SA Cemeteries Association (SACA) urged municipalities “to be prepared for an increase in the death rate”.

So far, hundreds of people have contracted the novel coronavirus from funerals and bodies that have been transported from Western Cape.
News
1 year ago

In New York, makeshift morgues — refrigerated containers on the back of trucks — have become a common sight on suburban streets.

In Madrid, Spain, last month, a popular ice rink was repurposed as a morgue, and in London, the Muslim community has clubbed together to establish temporary morgues at mosques.

In Italy, some hard-hit northern cities had no choice but to send the bodies of the deceased to small towns for cremation after morgues were overflowing with bodies.

Prof Lorna Martin, head of forensic services in the Western Cape, told TimesLIVE, “A Covid-19 death is considered a natural death. In that case, with a natural death, the body is normally the family’s responsibility,  not the state’s. That’s why we have the private undertaker industry.”

However, as the death toll curves up towards the predicted figures, all that could change.

“At some point, it would become the duty of the state because private undertakers would not be able to cope with all the bodies,” said Martin.

“We don’t have mortuaries for great numbers of deceased bodies. Normally, the bodies of those who have died from a natural death go to an undertaker, who has the mortuary and storage facilities.”

Martin said that field mortuaries next to field hospitals might become a necessity if the worst-case scenario plays out.

“In some countries, field mortuaries have been used. Fields are used for tents and refrigerators to store bodies. Where you have field hospitals you would need field mortuaries,” she said.

She said that bodies of those who have died of the virus are considered infectious, though their ability to transmit the virus is only through being touched.

The process of burying a loved one is often a week-long affair - the gathering of essentials, family members from far and wide and consultations with ...
News
1 year ago

While all precautions are taken, “most vulnerable would be the undertaker, the grave digger and the pallbearer, as there could be seepage of fluid while the body is being moved,” she said, adding that in SA, bodies were being double-bagged before being sprayed with hypochlorite solution.

According to the International Committee of the Red Cross, “mass fatality planning doesn’t mean there will be mass fatalities, but it’s imperative that plans are made.”

Stephen Fonseca, the ICRC’s head of forensics in Africa, said that “failure to plan and prepare for mass casualties risks the deceased being buried in mass graves, with few records and little understanding of who died and where the body is taken.”

Some of the proposals being considered include an ice-rink becoming a morgue in Durban, and a field morgue being established alongside an emergency response centre at Soccer City.

In Cape Town, according to mayoral committee member for community services and health, Zahid Badroodien, private facilities are being evaluated to see if they could ramp up their services for “sufficient [body] storage capacity across the metropole should the need arise”.

Traditional experts have slammed the Covid-19 rules and regulations, saying they were hindering families from practising their African culture and ...
News
1 year ago
Next Article