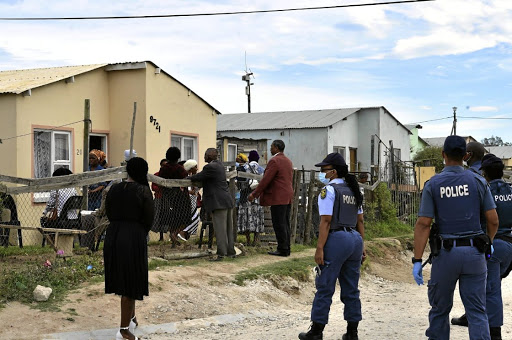 Police watch over funeral proceedings in Walmer township in Port Elizabeth in April. Funerals have contributed hugely to the spread of Covi-19 in Eastern Cape.
Image: EUGENE COETZEE

Funerals and the transportation of bodies of people who died from Covid-19, particularly from the coronavirus epicentre, the Western Cape, are contributing largely to the rising number of infections in the Eastern Cape.

This is proving to be a headache for Eastern Cape premier Oscar Mabuyane, so much so that he has asked national government to intervene and help find a solution to specifically regulate this.

So far, hundreds of people have contracted the novel coronavirus from funerals and bodies that have been transported from Western Cape.

Bodies of people who work in the neighbouring Western Cape are often transported home for burial in taxis and this has contributed to the spread of the virus.

Mabuyane said this was a sensitive matter.

"People are still ferrying these bodies in the normal way they have been doing through their burial societies, exposing a lot of people to the risk of being infected.

"We have seen a lot. When we tried to do a kind of testing [at the Western/Eastern Cape border], we got about 160-something cases of people who were in Kombis that are bringing those mortal remains back home. So that tells you the level of [the issue]."

He said that this was one of the problematic areas they have encountered in dealing with the spread of the virus that has seen cases in the province move from under 500 to 2,569 in a month.

Mabuyane said that funerals have been major contributors to the rising numbers and that they have reached out to the national government to intervene as the issue of burials was linked to cultural beliefs.

"We need a nationally regulated framework which is
going to guide this in the best interest of mitigating the further infections so that we can fundamentally disrupt the transmission of this virus amongst our people.

"It's a very sensitive matter but there is no decision that says people must be buried where they are. People can still be brought back but we've got to work around how best, as we bring people back, we are minimising further chances of contamination or spread of the virus," he said.

Mabuyane said infected people would then attend a funeral and spread the virus. He, however, said they were making progress in turning the tables.

". We are happy that our people have actually really responded very well and are managing this issue of funerals. Now with every Covid-19 body, people know it comes straight to the burial site and only a few members of the family that are allowed just to observe that moment from a distance."

Traditional experts have slammed the Covid-19 rules and regulations, saying they were hindering families from practising their African culture and ...
News
2 years ago

He also said that the stigmatisation of Covid-19 has proved a huge challenge in containing the spread of the virus. He said people found to be positive have mostly opted for self-isolation instead of going to centres provided by government.

Mabuyane said the province is ready to move down to lockdown alert level 3 next week, given its recovery rate, which was sitting at 1,036 at the weekend. There were also 58 deaths. More than 40,000 people have been tested and more than a million screened.

"I think we are actually rising to the occasion... Having seen how we have done since we registered the first positive Covid-19 case, I think we have done fairly well," he said.

"So that work on its own shows our strategy is working and in that process we are able to detect the virus and so far we have been detecting the virus at its embryonic stages in a number of our people. That's why we are still having a lot of recoveries."

Health department head Dr Thobile Mbengashe said: "In the Eastern Cape we have a number of events which are called super-infections events. These events are funerals, these events are in villages, these events are people moving in taxis, moving from one province to another, the workplace, the prisons and all that."

Mbengashe said that they could not stop people from buying food, making a living, burying their loved ones and collecting their grants.

"All those [events] create viability and susceptibility of the infection. What we are doing today is not to stop the infections but to reduce the levels of infections," he said.