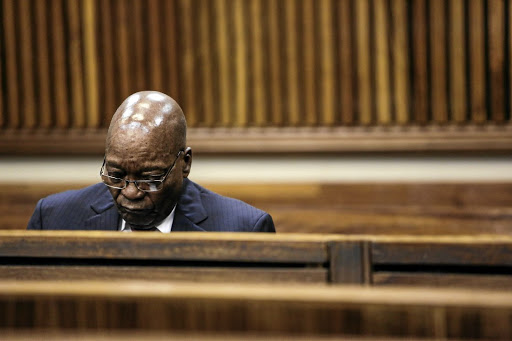 Former president Jacob Zuma's failed appeal against the ruling that he defamed former minister Derek Hanekom by calling him a "known enemy agent" paves the way for him to face a damages hearing and a grilling on the stand by Hanekom's lawyers.

Zuma's lawyers are, however, still considering their options, after the Supreme Court of Appeal dismissed the former president's efforts to challenge the Durban High Court's ruling in Hanekom's favour with costs, on the basis that "there is no reasonable prospects of success in an appeal and there is no other compelling reason why an appeal should be heard".

If they do not seek to appeal against judge Dhaya Pillay's ruling in the Constitutional Court, Hanekom's lawyers Dario Milo and Pooja Dela-Cron say Zuma "will have 24 hours to remove the defamatory tweet and to apologise for making the false and defamatory statement".

"Should he not do so he will be in breach of the court order and we will take all steps necessary to protect Mr Hanekom's constitutionally enshrined rights," they said, in apparent reference to the possibility Hanekom could sue Zuma for contempt of court.

In addition to the possible political humiliation of being forced to publicly apologise to Hanekom, any potential decision by Zuma not to appeal to the Constitutional Court means he will face a defamation damages trial. Hanekom has argued Zuma should be ordered to pay R500,000 in damages to him, which he says will be donated to charity.

The Supreme Court of Appeal (SCA) has dismissed a bid by former president Jacob Zuma to appeal against a court ruling that found he had defamed ...
News
2 years ago

Because so much of the evidence in the Hanekom defamation saga has been fundamentally disputed by both sides in the case, there is a distinct possibility that Zuma and Hanekom will be forced to testify and face cross-examination.

Zuma's lawyers had argued Pillay's judgment, which barred the former president from accusing Hanekom of being a "known enemy agent" or "apartheid spy", was an unconstitutional banning of Zuma's right to free speech.

They also contended that the judgment would have a "chilling effect" on his obligations to testify before the Zondo inquiry probing allegations of state capture, where he has previously accused several of his former ministers of potentially being apartheid spies.

Stemela said commission chair deputy chief justice Raymond Zondo had not yet met with Zuma's doctor about the alleged serious medical issues that had led to the former president previously failing to appear before the commission.

The commission is now "busy looking at how it will operate on resumption given the work still to be done and the time left for the commission to finish its work".

Hanekom took urgent legal action against Zuma after he referred to him as a "known enemy agent" in a July 25 2019 tweet, after his testimony before Zondo.

Days after giving that testimony, and in response to EFF leader Julius Malema's revelations that Hanekom "gave us the list of the ANC MPs who were going to vote
with us in the vote of no confidence against Jacob Zuma", Zuma tweeted: "I'm not surprised by @Julius_S_Malema revelations regarding @Derek_Hanekom. It is part of the plan I mentioned at the Zondo commission. @Derek_Hanekom is a known enemy agent."

Zuma's lawyers have insisted his tweet about Hanekom was written "in the context of the undisputed allegations made by Julius Malema about [Hanekom's] clandestine role in toppling [Zuma] from the position of state president" and did not state that he was an apartheid spy.