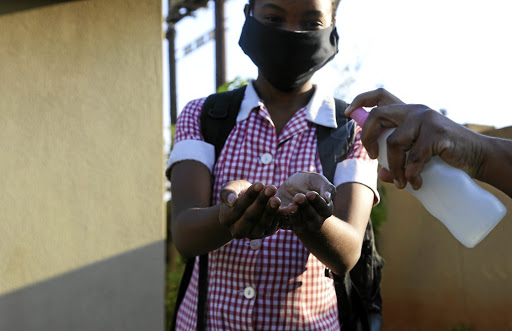 Grade 7 and grade 12 pupils are due to return to class on June 1, with safety andhygiene measures in place./ Gallo Images / Luba Lesolle

Parents have mixed feelings about the reopening of schools with grade 12 and grade 7 pupils meant to be back at school on June 1.

Some parents have opted for home schooling, while others said their children would continue with online teaching as the numbers of people affected by the Covid-19 outbreak kept increasing.

On Tuesday, basic education minister Angie Motshekga announced that schools would reopen on June 1, starting with grade 12 and grade 7 pupils.

"I have decided that my children are not going back to school, this is too risky. I would rather have them home-schooled. My son is at boarding school at King Edward VII School in Houghton and I understand that their classes are small but I can't guarantee his safety," Mogane said.

Buyelwa Nkosi, whose daughter is in grade 12 at Ferndale High School in Randburg, northern Johannesburg, said she was also worried about her safety.

"The schools are only left with two weeks to fumigate the classes and also to receive the safety materials. However, we have been hearing in the news that not all school management teams received their safety materials," Nkosi said.

"What guarantees do we have that by the time the schools reopen there will be safety materials at schools?

"I think for the first two weeks my child will continue with the online teaching
until I am certain that the school has all the safety measures in place."

Zukiswa Kamen, whose son is in grade 7 in Komani in the Eastern Cape, said he would not go back to school as scheduled.

"I am scared and I don't want to lose him to the virus. He will just continue with the online education until it is safe for him to go back to school. It does not make sense for me to work from home while he travels to school," Kamen said.

However, Vuyelwa Mdingi, mother of a grade 7 boy, said her child would go back to school because she was struggling with data and the network for online learning at home.

"I don't want him to be left behind, they have lost a lot of school time. I trust the minister when she said our children will be taken care of," she said.

Meanwhile, the Congress of South African Students is calling on parliament and provincial legislature members to open at the same time as schools, saying that if it was safe for pupils to return to schools it should also be safe for lawmakers to go back to work. National convenor Katleho Mangoejane said many government officials did not understand the deadly threat Covid-19 posed to schools.

"In our support to the minister for taking the bold step in announcing the reopening of schools subject to safety precautions being observed, we call upon government to also open places of worship," Mangoejane said.

Gauteng schools to get R15,400 for sanitising measures

The Gauteng education department has announced that R15,400 will be transferred to 1,752 schools that have been deemed to have the capacity to ...
News
2 years ago

No sign of management teams as schools await sanitisers

There was no sign of school management teams at schools in three provinces as personal protective material had not yet been delivered.
News
2 years ago

As provinces are gearing up for the re-opening of schools, the Johannesburg education district offices will remain closed as workers are demanding ...
News
2 years ago
Next Article