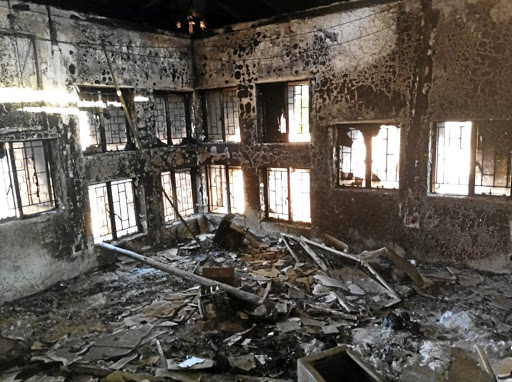 The partly burnt Bakgaga Ba Mphahlele traditional authority offices are still in ruins since they were torched last year./SUPPLIED

An unresolved battle for chieftaincy in Limpopo has seen tribal offices being torched and vandalised, and the dispute is now before court.

The Bakgaga Tribal Authority offices in Ga-Mphahlele outside Polokwane, which helped the community with proof of residence documents, among others, were damaged in violent protests last year.

The partly-burnt offices were shut down last year, forcing locals to travel outside their villages for such services.

Resident Percy Mathabatha said it has been difficult for residents of the 54 villages under Mphahlele to get services from their tribal offices following the dispute.

"People from Seleteng and Dithabeng villages pay almost R30 for a single trip to Lepelle-Nkumpi municipal offices in Lebowakgomo just to get a mere proof of residence. Developments have stalled because there is no royal council to administer issues of land, and the offices are now home for criminals," he said.

Mathabatha, who is also a community leader in the area, told Sowetan that many local business owners who wanted Covid-19 relief funds have been struggling to apply because there was no one to assist them with letters from the tribal authority.

The Mphephu-Ramabulana Royal Family Council has decided not to take the battle for Vha-Venda kingship in the family forward.
News
2 years ago

Another resident who wished to remain anonymous said: "Since the offices were closed, we do everything at Lebowakgomo ... and it's far. And we start by doing an affidavit at the police station, then go to the municipality."

She urged government to install an acting administrator to allow the offices to remain open for residents.

A video clip recorded inside the offices shows broken furniture, windows, ceiling and toilets. Department of traditional affairs spokesperson Motupa Selomo said they withdrew their staff from the offices after they were chased out by one of the warring factions.

"We are aware that the matter is before court, and we had appointed an administrator who was also chased away.

"When everything is back to normal we will be sending out our team to asses the building and we will escalate it to the department of public works for refurbishment," he said.

The offices were initially shut down after angry protesters demanded the removal of regent chief Sophie Ngwanamohube Phatudi-Mphahlele from the throne.

The matter is now before the Polokwane High Court and will be back in court on August 5.

Mathabatha said the Mphahlele area has five mines which are operational but are not benefiting the Bakgaga community because there is no tribal leadership.