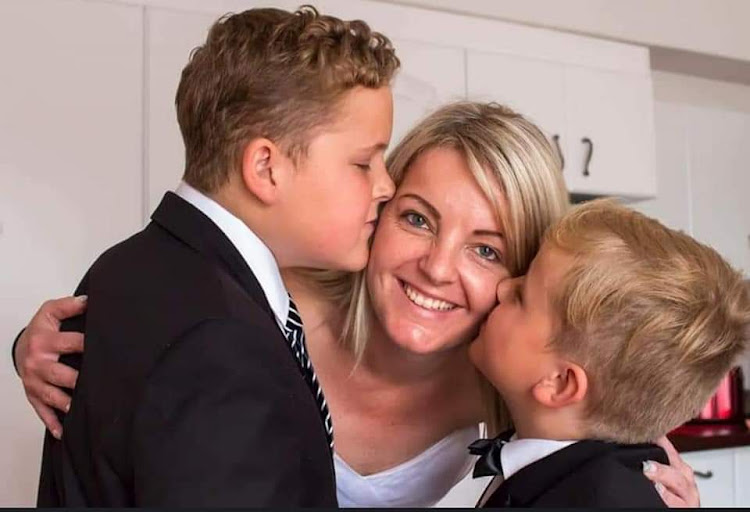 Cheree McEwen reunited with her sons on Saturday after recovering from Covid-19.
Image: SUPPLIED

Three weeks ago, East London mom Cheree McEwen was told that she'd contracted Covid-19 while undergoing surgery to remove more than 20 tumours from her body at Johannesburg's Morningside Mediclinic.

The hospital was later closed after 88 people there tested positive for the novel coronavirus.

McEwen initially tested negative but a second test a few days later, the results of which DispatchLIVE has seen, indicated that she had contracted the disease.

At the time, and still weak from the massive invasive surgeries, McEwen said: “I’ll kick Covid-19’s butt, just like I’m going to kick cancer’s butt. Because I’m a mom, and that’s what we do. We don’t give up! We fight until our last breath. I have my sons, my precious boys, to live for.”

Last weekend staff at St Dominic's Hospital in East London gave her the good news that she was asymptomatic.

The mother-of-two then spent an additional week in self isolation and, after being confirmed as virus free, the health department removed her from Buffalo City Metro's list of active cases.

In an interview with DispatchLIVE, McEwen said that St Dominic's Hospital and its doctors, nurses and emergency staff had been amazing, especially since they'd also needed to continually change her dressings from her recent operations.

McEwen said she was grateful to her ex husband, Mark McEwen, for being there for their two boys.

She also thanked all those who have supported her throughout her journey, including various family members, friends, doctors and nurses and a myriad of people who she had engaged with on social media and who had come together to help her in various ways.

McEwen on Saturday travelled to Komani to be reunited with her family.