Districts in SA to be put on different lockdown levels 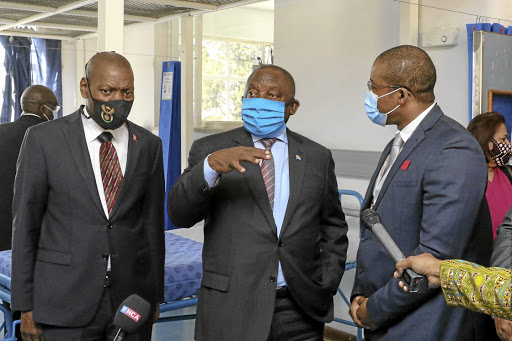 Health minister Zweli Mkhize says SA's approach to lockdown will now move to where different areas would be placed under different levels.

He said they would move from a one-size-fits-all approach when imposing lockdown and that closer attention would have to be paid to areas such as Cape Town that were registering a high number of infections.

President Cyril Ramaphosa on Wednesday announced that most of the country will move from level 4 to level 3 at the end of May. He, however, said that areas registering a high number of coronavirus cases would remain on level 4.

Mkhize yesterday said that the government would adopt a district-based approach to the lockdown where a hard lockdown will be imposed in specific
areas and lessened in others.

"The time has now come to look forward to the horizon and take bold steps to beat the virus. Government has thus prepared a district-based approach to its Covid-19 response, moving away from a one-size-fits-all method," Mkhize said.

According to Mkhize, the data around testing and screening from various provinces have been inaccurate.

He said this as mayors of Johannesburg, Cape Town and eThekwini, the metropolitans registering a high number of cases, briefed the portfolio committee on cooperative governance & traditional affairs.

South Africa could move to level 3 lockdown by June

President Cyril Ramaphosa said areas with widespread and uncontrolled infections of the coronavirus would likely remain on level 4.
News
1 year ago

"Districts have therefore been differentiated in accordance with the average active cases experienced over one week. Depending on the average active cases per 100,000 people, districts will be individually assigned levels of lockdown to prevent the spread of the virus," Mkhize said. "The case numbers will be monitored and the national command council will review the level of lockdown per district every two weeks."

In order to better monitor the lockdown and the spread of the virus in different districts, community-based organisations would be called upon to assist the government in ensuring compliance.

Mkhize said there would then be a team of health officials in each district to respond should a lot of people test positive in the districts.

"While these measures are put in place, more needs to be done to bolster our healthcare system. Professional medical teams need to be reinforced with medical experts, psychologists and social scientists.

"Each district should have a dedicated rapid response team to intervene should there be cluster outbreaks while screening, testing and case management is conducted," Mkhize said.

'We are not stuck in level 4': Ramaphosa on lockdown and ciggies

President Cyril Ramaphosa said consultations would start on Friday to ease the national lockdown to level 3 but he was reluctant to elaborate on the ...
News
1 year ago

The whole of the Western Cape must move to level 3 of the lockdown with the rest of the country, premier Alan Winde said on Thursday.
News
1 year ago

Most parts of SA may be downgraded to Covid-19 alert level 3 next month as the government moves towards easing national lockdown restrictions and ...
News
1 year ago
Next Article