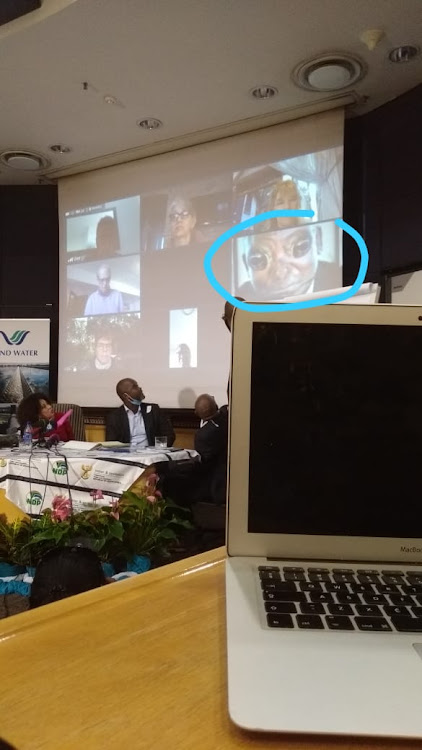 A water and sanitation department virtual meeting was halted on Wednesday after a 'suspicious' user appeared on the screen.
Image: Eyewitness News / via Twitter

A media briefing by minister Lindiwe Sisulu on corruption at the water and sanitation department was rocked by apparent “Zoom-bombing” on Wednesday.

The user insulted the ANC government and criticised its apparent non-action on corruption.

Midway through the briefing, the faceless user logged in and first displayed a placard on which was written “f**k the ANC”.

A few seconds later, the hacker showed another placard with the words “number of people jailed for corruption under [president Cyril] Ramaphosa = 0", with the zero circled around the president's face.

#COVID19SA The water and Sanitation Zoom meeting has been shutdown because of this suspicious individual who logged on pic.twitter.com/61oNqrHSVt

The hacker's final act before the Zoom feed was cut off was to post a Photoshopped picture of Ramaphosa with a clownish appearance.

The media briefing continued without the Zoom feed where other water and sanitation officials had joined in.

Does former president Jacob Zuma have millions of rands or dollars stashed away in a bunker at his Nkandla home?
News
1 year ago

State capture commission witnesses get a reprieve ... for now

People accused of facilitating and aiding - or being witnesses to - state capture can breathe a temporary sigh of relief.
News
1 year ago
Next Article