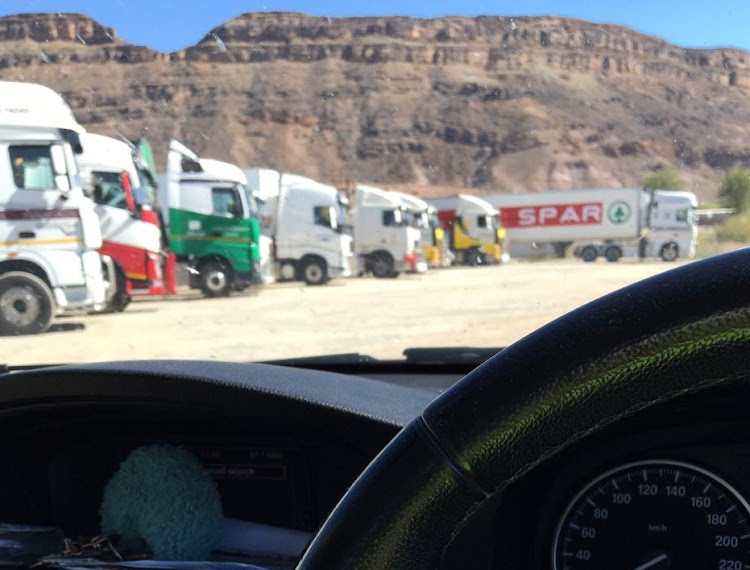 Trucks wait at Vioolsdrift border post, between SA and Namibia, after immigration officials staged a protest over lack of water on May 13 2020.
Image: Supplied

One of the seven border crossings between SA and Namibia was closed by immigration officers on Wednesday, allegedly in protest at a lack of water.

A clearance agent at Vioolsdrift border post, at the northern end of the N7 in the Northern Cape, said officials closed the gates at noon after losing patience regarding the lack of water.

Trucks carrying cargo between the two countries immediately began to build up on both sides of the border, said the agent, who declined to be named.

“The main issue here is it seems the department of water knew about this issue, apparently for a few months, but they haven’t done anything about it,” the agent said. 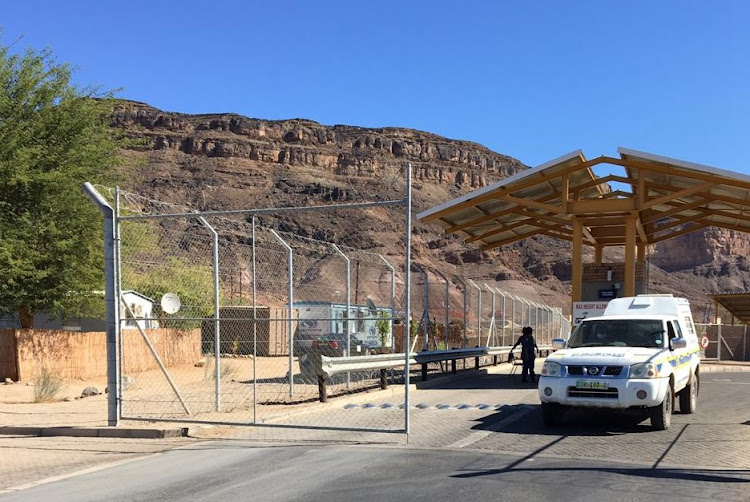 The gate was closed at Vioolsdrift border post on May 13 2020.
Image: Supplied

The agent blamed the affair on government departments’ apathy. “What makes it worse, they are not in the middle of nowhere. They could bring in a temporary truck,” the agent said.

The border had been quiet during the five weeks of level 5 lockdown, but had become busier in the two weeks since level 4 was introduced.

“Just for my office alone, you are looking at 30 trucks per day coming and going through the border, and there are about six or seven different agencies at the border. We have about 200 trucks crossing that border per day.

“The other issue is that those trucks are cold trucks and they will run out of diesel [while keeping their engines running at the border].

“So they will have to run back about 70km to Steinkopf or 110km to Springbok to fill up. Otherwise they are in trouble.”

Businessman and former DA MP Pieter van Dalen said he was also affected. “I have trucks that go through there and I deal with these people. I import Namibian wood and sell it here as firewood,” said Van Dalen.

The R37m fence at the Beitbridge border separating South Africa and Zimbabwe was hardly up a day before trespassers cut through it to smuggle in ...
News
1 year ago

“Everybody is out of work with this Covid-19 and if we can’t get our products through to the couple of people who can still work then it’s a disaster. We can’t work like that. You can close the whole border post and stop the economy.

“You can’t believe how many trucks go through there now. Those people in Namibia need the goods. This is the main border post linking us to Namibia and the rest of the continent.”

TimesLIVE has seen communication between the departments of public works and home affairs about the issue.

“Even though all maintenance activities are a national function, the Kimberley regional office has been trying all means to assist with the provision of water and desludging for the past two weeks. We are trying to resolve the crisis as soon as we can.”

Home affairs minister Aaron Motsoaledi’s spokesperson, Siya Qoza, has been asked to comment. His response will be added when it is received.

While SA experienced a significant drop in vehicle crime during the national lockdown, activities are returning to normal levels as the country's ...
News
1 year ago

The government was forced to bend lockdown regulations and open the border to allow foreign nationals awaiting deportation to be allowed to cross and ...
News
1 year ago
Next Article