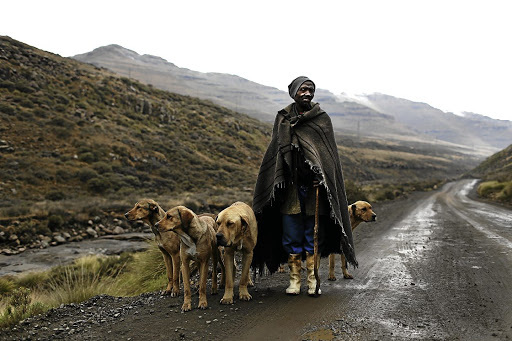 A Basotho man walks his dogs through a mountain pass in Lesotho. The isolated country recorded its first case of Covid-19 on Wednesday.
Image: Alon Skuy

Lesotho recorded its first case of Covid-19 on Wednesday, the health ministry said, becoming the last country in southern and East Africa to be afflicted by the virus.

The ministry said it had conducted 81 tests for Covid-19 from travellers from SA and Saudi Arabia, of which one was positive.

Lesotho has until now been spared the coronavirus. The disease has struck at a time of political uncertainty, with embattled Prime Minister Thomas Thabane due to step down by the end of next week after his coalition collapsed in parliament.

His exit would clear the way for a solution to a political crisis that erupted late last year, when he and his current wife were accused by police of murdering his former wife nearly three years ago. They both deny the charges.

It is unclear when he will step down, although parliament has already provisionally named finance minister Moeketsi Majoro as his replacement.

A report by the UN humanitarian aid co-ordination agency two days ago had put Covid-19 case figures for East and southern Africa at almost 18,000, with all countries affected except Lesotho.