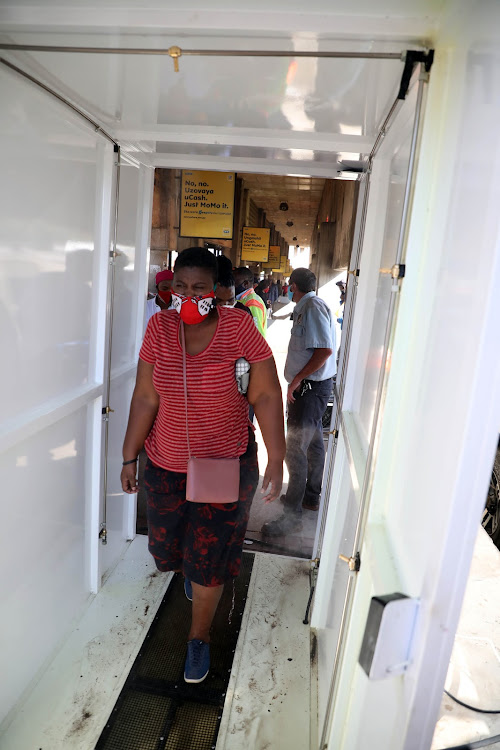 Commuters in Soweto are not entirely convinced by the government's attempts to curb the spread of Covid-19 by introducing walk-in sanitation tunnels.

This comes after the Johannesburg mayor, Geoff Makhubo, and the Gauteng transport MEC Jacob Mamabolo oversaw the implementation of the tunnels and other social distancing innovations at the Bara Taxi Rank in Diepkloof.

Anna Lephalala told the Sowetan that she was happy that the government was putting measures into place to slow the spread of Covid-19 in densely populated areas such as taxi ranks.

“There are hundreds of people who walk here everyday but they wont walk through the tunnel. You can see right now that there are people who are walking on the other side of the road where this machine is not placed,” Lephalala said.

Another commuter said all the measures that are being implemented are done for the good of commuters and society at large.

Another commuter Nkanyiso Fuzile said it would be difficult to channel every commuter through the sanitation tunnel.

“There is no order at taxi ranks. People walk all over the place, taxis stop and drop off commuters wherever they want to as well. So how are they going to make sure that everyone walks through the tunnel, and how does it work,” he said.

Baconi Mokoena from Raw Industries, the company that built the two tunnels at the taxi rank, explained that the spray in the machines is a water-based organic chemical..

“The reason the liquid does not contain alcohol is that we dont want alcohol to be blown into the air - alcohol is an irritant and is flammable,” Mokoena said.

“There is also a scanner in the tunnel which reads a person’s body temperature as they walk through. If someone’s temperature is too high, we isolate them and ask them to go again because you might find that he/she was running or was smoking, so their temperature is bound to be high.”

Mokoena said if the person fails the temperature test again, then they will be referred to the nearest health facility to be screened and tested. Mamabolo said there are 881 taxi ranks in the province and government intends on expanding these measures to all of them.

"We want to replicate and expand [these measures] to other taxi ranks throughout the province."

"With the outbreak of Covid-19, it is clear that commuting will never be the same again," said Mamabolo.

Mamabolo said that there has been an increase in activity at taxi ranks since the implementation of Level 4 lockdown regulations as many people head back to work."We therefore felt it was important to strengthen and improve our capacity to take effective control and create a level of order at taxi ranks to allow us to ensure that the required activities to combat Covid-19 are implemented."The first sanitising walkthrough tunnel at a taxi rank was installed last week in Ranburg, by Sigma Medical.

News of Ben Motshwari contracting Covid-19 has increased fear and anxiety among some players in the Premier Soccer League (PSL).
Sport
1 year ago
Next Article