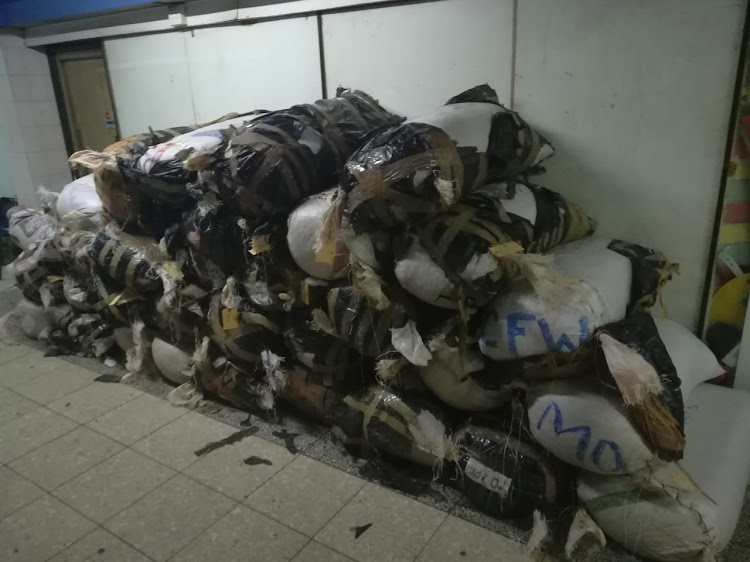 Five suspects were arrested after they were caught loading 57 bags of dagga into a truck at business premises in Edison Road, Mkondeni, in Pietermaritzburg.
Image: Provided

Five people were arrested after they were caught loading 57 bags of dagga into a truck at business premises in Mkondeni, Pietermaritzburg.

Police officers and a security company who embarked on an intelligence driven operation, said the truck had been scheduled to travel to Cape Town on Saturday night.

Police said that information was received that the illegal operation was taking place at a business premises on Edison Road, and officers “kept surveillance on a truck that was used to transport the dagga”.

“Police observed five suspects loading dagga into the truck and pounced on the premises. All five suspects, aged between 21 and 45, were placed under arrest,” said police spokesperson, Brig Jay Naicker.

Naicker said a total of 57 bags of dagga, with each bag weighing between 30 to 40 kilograms, were seized. The street value of the dagga was estimated at R1.7m.

Two arrested for possession of 60kg of dagga in KZN

Police arrested two people after two compressed dagga parcels weighing 60kg were found inside their vehicle in Paulpietersburg, KwaZulu-Natal, in the ...
News
2 years ago

A case for possession of dagga was opened at the Alexandra Road police station for further investigation.

“This arrest proves that we are closing in on suspects who are dealing in drugs within our province. More arrests can be expected as operations are still ongoing,” said Jula.

The suspects were expected to appear at the Pietermaritzburg magistrate's court on Monday.