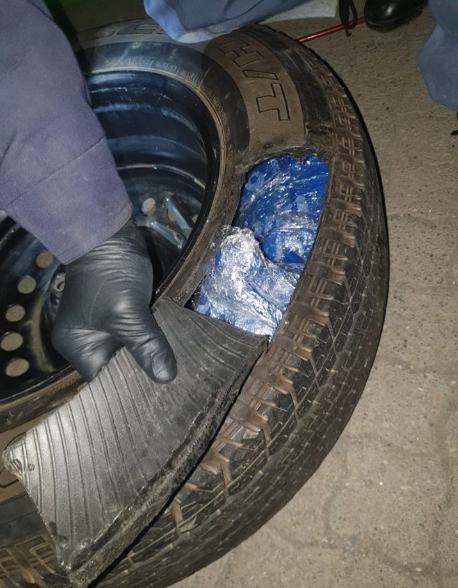 The drugs were found hidden in the spare wheel of the bakkie.
Image: Supplied

A 56-year-old Johannesburg man was arrested during a roadblock in Calvinia, in the Northern Cape, on Friday morning after police found drugs worth nearly R4m hidden in the spare wheel of his bakkie.

The suspect was found in possession of 12.6kg of crystal meth with an estimated street value of R3.9m.

“The drugs were hidden in the spare wheel of the bakkie he was driving. An empty hidden compartment was also discovered in the seat of the bakkie.

The suspect is expected to appear before the Calvinia magistrate's court on Monday.

“The Directorate for Priority Crime Investigation (DPCI) will be investigating the case further,” Ramatseba said.

A 23-year-old man was arrested in Hartbeesfontein over the weekend after he was found in possession of lion skins and drugs, the North West Hawks ...
News
1 year ago

Suspects nabbed in Kraaifontein with illicit liquor, drugs and cigarettes

Police in Kraaifontein arrested a 46-year-old woman on Thursday for possession of presumed stolen property, dealing in liquor and drugs as well as ...
News
1 year ago
Next Article