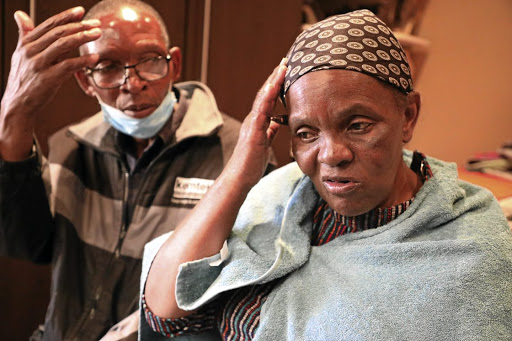 The mother of a woman who was shot in cold blood by a man she was trying to break up with has told of her pain and how she dodged a bullet that night.

The attack happened on Tuesday in Katlehong, on the East Rand, shortly after Nolundi Dondolo, 32, and the father of her nine-year-old daughter, Themba Ndlovu, 39, held a meeting at Dondolo's home to resolve their issues.

Dondolo's mother Jane Dondolo said her daughter had been trying to break up with Ndlovu since February but he would not accept it.

"We held a meeting on Tuesday after my daughter asked us to help Ndlovu get closure and talk to him to accept that she could no longer continue with the relationship. Little did we know Themba had other plans," said Jane.

She said her daughter and Ndlovu had been in a relationship for 10 years.

"After the meeting, we thought Themba had left and had accepted that their relationship had ended, but he waited for her outside the yard on the pavement where his car was parked.

"Nolundi went to her room in the backyard where he [followed and] attacked her."

President Cyril Ramaphosa says that as the country enters level 4 of the lockdown on Friday, government has determined that people providing services ...
News
2 years ago

An emotional Dondolo senior said: "He pushed the door of her room. We heard her scream. When we arrived he had a gun and fired the first shot, and almost shot me in the head."

Dondolo's mother said she pushed Ndlovu and he fell as Dondolo ran outside.

"He immediately got up and ran after her. He found her on the street just outside the house about 15 metres from the gate and grabbed her by the wrist."

She said she heard her daughter screaming: "Themba, please don't shoot me."

Jane said she was standing just about seven metres away from the duo when she realised that her daughter was going to die.

"He didn't even hesitate. It all happened so fast. I helplessly watched as he shot her twice in the head. She fell to the ground and then he shot himself once in the head, and that was the end."

When Sowetan arrived at the house, there were friends, relatives and colleagues who came to offer their condolences.

In the early afternoon, elders arrived from the mortuary where Dondolo's body was identified and transferred to the family's preferred undertaker.

Denying allegations that he said he had "killed that dog" - referring to his wife - attempted murder accused Mkhuseli Boto told the PE regional court ...
News
2 years ago

Police spokesperson Const Sivenkosi Mtwa said a case of murder, possession of unlicensed firearm and an inquest were being investigated.

"Four cartridges, one projectile and the firearm were found on the scene. The firearm will be taken to ballistics to have it checked if it was not used to commit other crimes in the country," said Mtwa.

Police minister Bheki Cele said they have conducted comparisons of the period March 27 2020 to April 20 2020 with the similar period in 2019 and have noted a decrease in the number of domestic violence crimes.

"These include but not exclusive of murder, attempted murder, rape and sexual assault. The national picture reflects a decrease by 69,4% from 9,990 cases between 29 March and 22 April last year to 3,061 since the lockdown until 20 April 2020, meaning a difference of 6,929. What has been most concerning is the fact that in most of these domestic violence incidents, the perpetrators are well known to the victims - spouses, partners, close relatives," Cele said.

Dondolo's father Victor said: "She was an amazing child and successful. She had just bought a car in February and was getting ready to buy herself a house. He's also dead, so that's the end of justice for us."

Criminals in some of the most violent cities in the United States have been driven to ground by Covid-19, according to a report.
News
2 years ago

A 33-year-old police officer was shot and killed while attending to a domestic violence call in Sandton on Thursday night.
News
2 years ago
Next Article