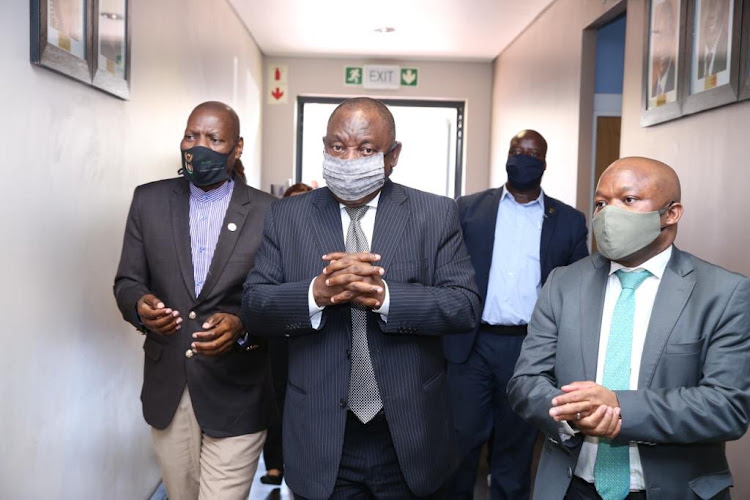 President Cyril Ramaphosa has given credit for the leadership shown by his ministers during the Covid-19 pandemic.

In his address, Ramaphosa said, while the worst is yet to come, the ministers were doing a stellar job within their departments.

Ramaphosa said Mkhize was doing an amazing job by giving guidance and leadership.

He said the applause coming from international bodies such as the World Health Organisation (WHO) was because of Mkhize’s performance.

“I’m not saying this because I’m South African or president but, when they look at us, they truly see a shining example of how countries should have responded to the challenge of Covid-19. We have been direct and scientific in the approach we have embarked on,” Ramaphosa said.

But he added, “We are by no means out of the woods, we are still deep in the woods.”

“Also, the important thing is that we have relied on science. We haven’t been flying by the seat of our pants and thumb sucking everything.

“The fact that he [Mkhize] enlisted top-class scientists and doctors as we saw, led by Prof Abdool Karim, has positioned us very well because we haven’t been sending out confusing messages.”

On Dlamini- Zuma, Ramaphosa applauded the managing of the state of disaster, led by her.

“In terms of managing the whole state of disaster, Minister Dlamini-Zuma has also positioned us very well, from a leadership perspective.

“The way we have responded to the challenge is the way we should respond to the next challenge we’re going to face, the economic way,” said Ramaphosa.

Nompumelelo Ncube is one of our healthcare heroes working on the frontlines of the COVID-19 fight.
SebenzaLIVE
2 years ago

President Cyril Ramaphosa is expected to visit KwaZulu-Natal on Tuesday to discuss the province's plans and monitor its state of readiness for ...
News
2 years ago
Next Article