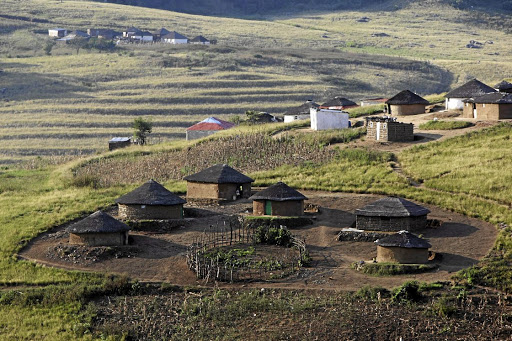 The Ingonyama Trust began charging people rent on land they had traditionally owned. The money is supposed to be used for community development.
Image: ER Lombard/ Gallo Images via Getty Images

The Ingonyama Trust Board has blamed insufficient funding from the state for its failure to submit its budget plans for the 2020/21 financial year on time.

As a result of this failure, the department of agriculture, land reform and rural development is yet to allocate funding to the entity.

According to the National Treasury framework on strategic plans and annual performance plans, it is important that these are linked to a budget that ensures key objectives and priorities are budgeted for and achieved. But the Ingonyama Trust failed to submit a budget along with its plans.

Minister Thoko Didiza confirmed to a joint meeting of parliament's oversight committees on land that the board presented its annual performance plan, which was tabled in parliament, but there was no budget linked to the plan.

The entity's entire executive management is suspended but board chairperson Jerome Ngwenya wouldn't discuss the reasons, saying the matter was before courts.

He also insisted that the personnel were not on suspension but on “special leave”.

MPs raised a series of concerns about the trust, its board and finances. They also wanted to know about its youth and women empowerment programmes, saying the board was established to empower people in rural villages.

72-year-old Agnes Sithole went to court to challenge a sexist law, and won a legal victory that will protect about 400,000 other black SA women.
News
1 year ago

ANC MP Busisiwe Tshwete expressed concern at the suspension of six executive members of the board, some of whom have been suspended since last year. Tshwete also noted that the trust has had acting CEOs and chief financial officers since 2018.

Another ANC MP, Ndumiso Capa, questioned the R4m the board has set aside for legal fees, noting that it was close to the amount proposed for board fees. It is also allocating R5m to cover doubtful debt.

The EFF's Mothusi Montwedi said while communities appeared to be benefiting from the Ingonyama Trust on paper, on the ground it seemed to be a different story.

Ngwenya argued that when the Ingonyama Trust Board was established, the law that created the board provided that funding for the trust would come from the government of the time.

He decried a subsequent law which he said reduced that to say “the department of land affairs shall bear the cost of the administration of the board, that's all”.

“In other words, there is no funding for what is referred to as service delivery and any project,” said Ngwenya.

“It is for that reason that even this budget that is currently withheld from the minister right now for [the] reason that it was submitted late, it would only have been R22m. The Ingonyama Trust Board has never received an amount higher than that,” he added.

Disappointment as KZN land rights case postponed to next year

The big showdown between the Ingonyama Trust, whose sole trustee is Zulu king Goodwill Zwelithini, and informal land rights holders in KwaZulu-Natal ...
News
2 years ago

Ngwenya said the staff cost alone was more than R22m and, because of this, it was impossible for the board to run certain projects.

The board's proposed budget for 2020/21 is R52.2m. It gets R22m from the department of land reform and rural development and it raises the shortfall in its operating expenses, collecting about R43m from the revenue on mining rights, levies and leases.

Ngwenya said by explaining the legislative constraints, he was trying to answer the question about why there was no budget linked to the annual performance plan.

He said acting CEO Sandile Gabela started acting only in February 2020, when, he said, there was no budget submitted from the minister for the first time in the history of the board.

“I've tried to explain why there is no budget linked ... This sitting can note that without the R22m from the state, there is hardly anything serious that can be done,” he said.

In explaining the legal fees, Ngwenya said they were defending cases, including one in the high court where the mandate of the trust was being challenged by people who say it must not receive any money “from the users of the land”.

“Nobody to this day has ever given an indication on what should be the source of income for the Ingonyama Trust and Ingonyama Trust Board. We will then leave the matter to the courts,” he said.

Zulu monarch King Goodwill Zwelithini is prepared to go as far as the highest courts in the land to protect the Ingonyama Trust against "the king's ...
News
2 years ago

Racist former Sodwana Bay guesthouse owner Andre Slade has just 16 days to vacate the land he has been occupying for the past 12 years in ...
News
2 years ago
Next Article