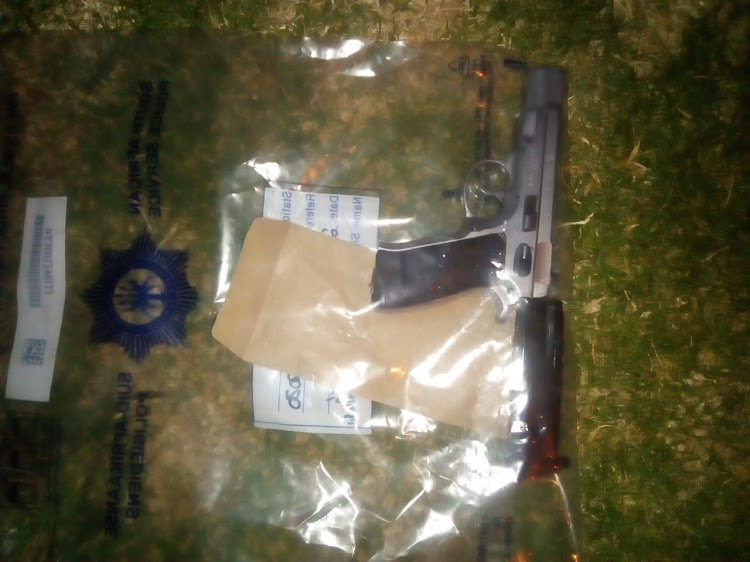 The gun that was used in the alleged murder and suicide
Image: Supplied

A Katlehong man allegedly killed his girlfriend and turned the gun on himself after attending an unsuccessful family meeting to try and resolve a dispute.

Police spokesperson Cst Sivenkosi Mtwa said the incident happened on Tuesday afternoon at Moleleki ext 1. "Katlehong police received a complaint about shooting in progress at Moleleki Ext 1. Upon arrival, the police found two bodies in a pool of blood lying on the street," said Mtwa.

Mtwa said an investigation revealed that the lifeless bodies of a 32-year-old female and a 39-year-old male on the street were a couple who were both attending a family meeting which was arranged by family elders to resolve disputes that the couple were having in their relationship.

"It is alleged that the meeting didn't go the way it was planned and as a result, the boyfriend pulled a suspected stolen firearm and shot at his girlfriend on the upper body," said Mtwa.

Mtwa said the man then shot himself on the upper body as well. It is alleged that the man used an unlicensed firearm that was found on the scene.

"They were both declared dead on the scene," he said.

Police have opened a case of murder that includes possession of unlicensed firearm and the case of inquest for further investigation.

Four cartridges, one projectile and the firearm were found on the scene and the firearm will be taken to ballistics in order to have it checked if it was not used to other previous shooting incident in the country.

President Cyril Ramaphosa says that as the country enters level 4 of the lockdown on Friday, government has determined that people providing services ...
News
1 year ago

Denying allegations that he said he had "killed that dog" - referring to his wife - attempted murder accused Mkhuseli Boto told the PE regional court ...
News
1 year ago
Next Article