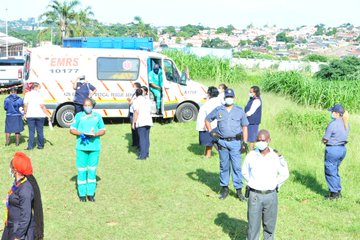 A DA MP has laid a charge against KwaZulu-Natal premier Sihle Zikalala for allegedly defying lockdown laws by convening a gathering at a hospital on Freedom Day.
Image: KZN Government via Twitter

Police have confirmed they are investigating whether KwaZulu-Natal premier Sihle Zikalala contravened the Disaster Management Act when he held a gathering in Clairwood, south of Durban, on Monday.

National police spokesman Brig Vish Naidoo was not immediately available to comment, but on Friday morning he told Eyewitness News  police were looking into Zikhala's alleged breach of the lockdown regulations.

"I can confirm a case was opened against a senior politician in KwaZulu-Natal who is alleged to have arranged a gathering at a hospital in the province. The matter is with the SA Police Service and we are currently investigating it in terms of the regulations of the Disaster Management Act."

The National Education, Health and Allied Workers’ Union (Nehawu) is seeking legal advice on how to act against Zikalala.

"We believe he did contravene the lockdown regulations when he held a rally. We are exploring many options on how to respond, and we are taking legal opinion. By next week, we will have a way forward," said provincial secretary Ayanda Zulu

He said the premier had put the lives of health workers at risk.

"We can see from the videos it was a rally. Workers stood out there for hours," Zulu said.

DA MP Dianne Kohler Barnard laid a criminal charge against KwaZulu-Natal Premier Sihle Zikalala for what she believed was an illegal gathering at ...
News
1 year ago

eThekwini will move to stage 4 on Friday with the rest of the country, says KZN premier

On Monday, DA MP Dianne Kohler Barnard laid a criminal charge against Zikalala for what she believed was an illegal gathering in Clairwood.

Zikalala has, however, dismissed her claim as fake news, saying he was doing routine government work.

According to her complaint to police, Zikalala had contravened the Disaster Management Act and national lockdown regulations at Clairwood Hospital at 10.30am on Monday.

In a video shot outside the Montclair police station, where she laid the charge, Kohler Barnard said nurses and other essentials workers were allegedly "pulled out of the hospital to listen to Zikalala speak."

"They claim there was social distancing, but that is irrelevant because, in terms of the Disaster Management Act, no gathering may take place unless it is a funeral. This was most certainly not a funeral."

In a statement issued on Monday evening, Zikalala denied doing anything wrong.

"The provincial government of KwaZulu-Natal notes with dismay the statement by the Democratic Alliance alleging it had organised a rally.

The premier conducted an "inspection in loco" to ensure facilities were ready for quarantine and isolation.

"This was not a gathering, as contemplated in the lockdown regulations, but ongoing routine work to monitor the state of preparedness by the province to respond to Covid-19."

"The provincial government implores members of the public not to fall for fake news and cheap publicity stunts which are meant to shift focus away from the main task at hand."