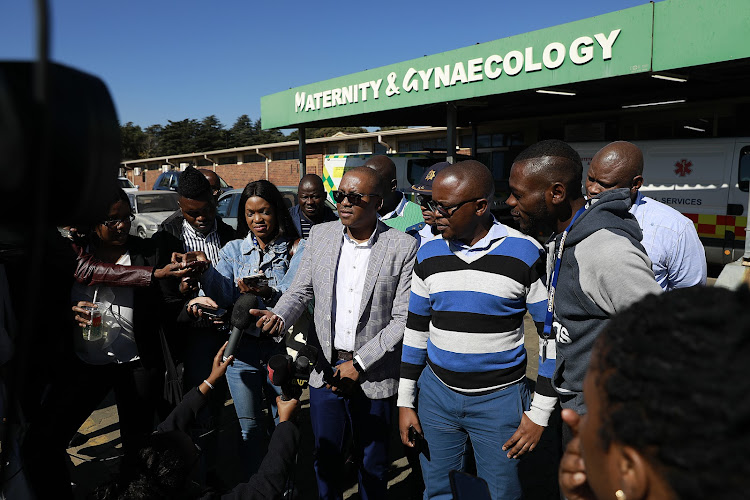 Gauteng MEC for health Dr Bandile Masuku addresses journalists. 'Our officials are failing us and this is disappointing,' he said. 'We are sorting the matter out and those at fault will be made to account.'
Image: ALON SKUY

Gauteng health MEC Dr Bandile Masuku says he is disappointed at reports that some health-care workers in the province have not been paid their salaries.

This was after an internal memo from the Tshwane district services was leaked on social media on Tuesday.

The memo said the department had experienced some delays in the processing of some allowances, including basic salaries, commuted overtime and sessional claims. It instructed that “creditors” should be alerted about the “potential delay” in April and May.

Responding to the memo, Masuku tweeted that he had been alerted to the delay in some payments.

“I was informed about this correspondence actually. Our officials are failing us and this is disappointing. We are sorting the matter out and [those] who [are] liable, are going to be made to account. It is unacceptable,” he said.

Health workers at different facilities expressed concern about their payments. These include Charlotte Maxeke and Thelle Mogoerane hospitals.

The National Association of Democratic Lawyers has welcomed the arrival of "highly skilled and specialised doctors" from Cuba.
News
1 year ago

German doctors have posed naked online to protest a shortage of protective masks and gowns, which they say puts them at greater risk of catching the ...
News
1 year ago

Spokesperson for the department, Kwara Kekana, could not comment on the extent of the problem, except that the matter was being handled.

“We will send out a communiqué once engagements are done with relevant parties,” she said on Wednesday.

The DA’s Gauteng shadow MEC for health, Jack Bloom, said: “I am getting reports from all over, this is shocking because these are people on the front line.”

While Bloom said he hoped the matter would be resolved soon, he attributed the delay in payments to the historic failures of the department.

“Unfortunately the department is very inefficient. It’s not the first time this has happened, but you would have thought that in this crisis our health workers are looked after,” said Bloom.

He said he was also receiving calls about inadequate rollout of equipment for health workers.

“It’s just unbelievable this could have happened, but as I said we’re dealing with many years of dysfunction in Gauteng provincial government and unfortunately they get exposed during a crisis,” added Bloom.