Farmers and community in Overberg open their kitchens to the poor 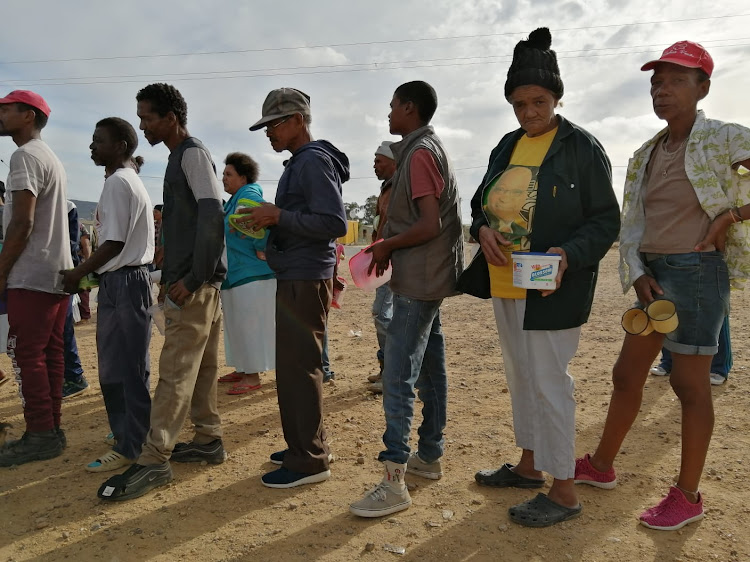 Fransien Filander holds an empty margarine container which will soon be filled with soup. It will be her only meal for the day.
Image: Aron Hyman

In the Overberg district of the Western Cape, farmers and townspeople are bartering agricultural produce to keep soup kitchens full and nutritious and the hunger at bay as the national lockdown forces thousands out of work.

By the end of last week food relief promised by government in the form of food parcels had not yet filtered down to rural farming towns in the Overberg.

Instead farmers and ordinary townspeople fearing social unrest and crime due to the hunger which would come from the layoff of thousands of day workers took it upon themselves to feed those most in need.

By Friday, kitchens run from restaurants, now non-operational due to the restrictions placed on the service industry as part of strict lockdown measures to fight Covid-19, produced 700 litres of soup a day.

Half a ton of mutton and game meat from nearby farms, including three deer and a Black Wildebeest, were donated to fill the soups with protein.

Sandra Human, who owns the renowned Black Oyster Catcher wine venue with her husband Dirk, is one of the farmers in the area who have opened their kitchens and their hearts to their community. 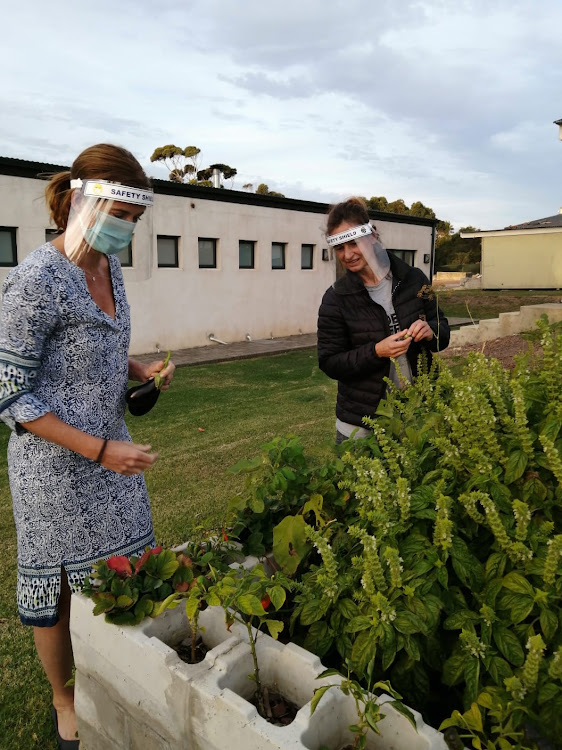 Nearly all the greens from her large vegetable garden have already gone into the soup pots.

Speaking from the Black Oyster Catcher wedding venue, Human was unable to hold back tears. Around her the preparations for a wedding which that was supposed to be held on  March 28 lay in limbo.

The bride paid in full, but her husband told her to pay the bride back half of the money while they were still able to do so.

“I bought all the stock, everything, for the wedding. My husband said, pay her half back while we can because for a couple having a wedding for 120 people ... She just mailed me the other day and said thank you, because she lost her job, her husband lost his job, they just heard last week,” she said.

But the Humans are also in dire straits. 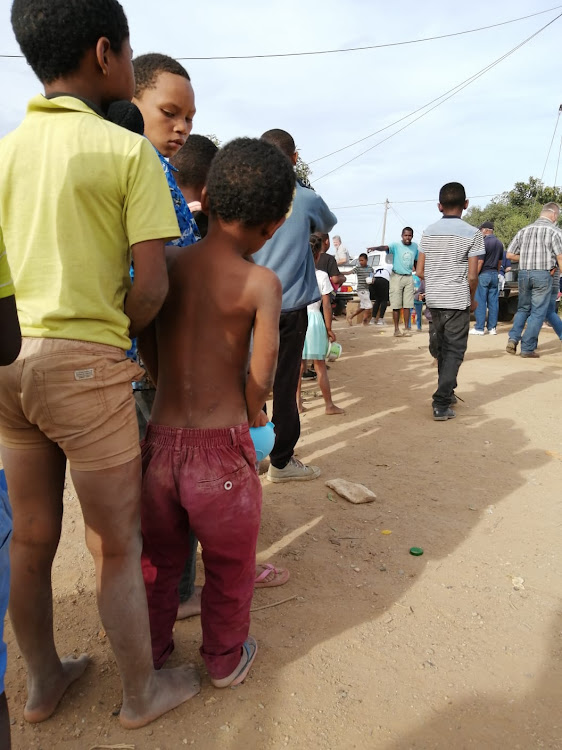 Children at an informal settlement in Bredasdorp situated next to the local tip wait in line for food. The lockdown has affected residents living here the most, and many are foreign nationals who reside in South Africa illegally making it difficult to qualify for government relief.
Image: Aron Hyman

“The amazing thing with this whole thing is you keep on seeing it in perspective. We are where we are now, but I’m still able to help people with feeding or whatever,” she said.

“But, for us it’s just the same uncertainty as for everyone else. I just can’t see when we’ll recover from this, if ever. Where do you start again?” asked Human.

She has cooked a black wildebeest into 90 litres of broth, enough to feed thousands of people when it is mixed into the larger soup pots. She and her husband exited staple food agriculture 20 years ago and sold most of their land.

“I think for the first time we are realising the value of farmers and the agricultural community, it’s the back bone of the country. Agriculture is always last on the list (of government priorities), we are always the (political) scapegoats,” she said.

Farmer Melissa van Breda arrived at Black Oyster Catcher on Thursday to collect a few buckets of broth for the next day’s soup being prepared for the poorest residents of Struisbaai.

Van Breda said after President Cyril Ramaphosa announced that the lockdown would come into effect at midnight on Thursday March 26 local farmers knew that soup kitchens and feeding programmes would need to be operational the next day to stave off hunger.

“It was incredible, the response was amazing, the farming community completely rallied around their towns and within two weeks half a ton of mutton has been donated from various farmers in the area, and that was processed free of charge by the Bredasdorp Slagpale (abattoir) as well as the Elim Slaghuis,” said Van Breda.

“We’ve been feeding since before the government grants have been paid out, before the municipality got involved. These farmers have really rallied around their community and offered their help,” she said.

“Half a ton of meat has been distributed to various soup kitchens. Overberg Agri donated 20 tonnes of mealie meal as well which is being distributed through communities around the district. This extends from Arniston, Elim, Napier, Bredasorp, Struisbaai, Protem, it’s a vast area,” said Van Breda.

But in Struisbaai the township is falling silent as the money for electricity runs out and queues for food grow longer by the day. 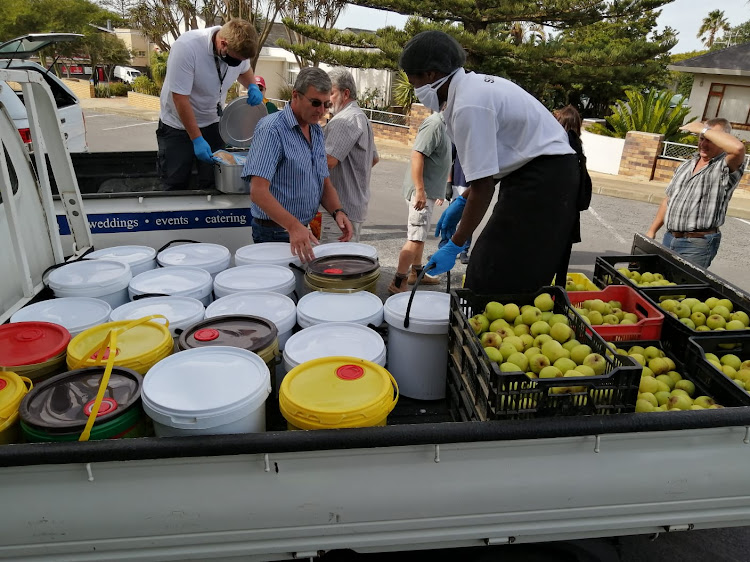 Soup, apples, and bread are loaded onto a bakkie by volunteers.
Image: Aron Hyman

“When you drive into the informal settlement area in Struisbaai North you don’t hear any music playing where you usually would because there’s no electricity so they don’t have anything to cook with,” said Van Breda.

“You don’t see children walking around with a snack or a packet of chips because they don’t have money to buy anything. These people are now solely reliant on any food we are able to give to them,” she said.

At one of these collection points volunteers gathered. Bakkies arrived with various goods. Bread, apples, and the bulk of the soup is brought from a local catering company with a kitchen able to boil several hundred litres of soup at a time. 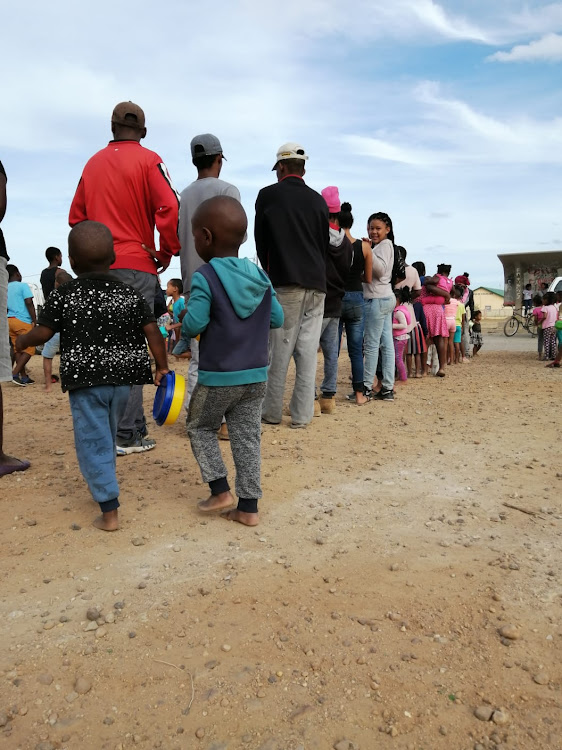 Children and elderly are the priority for the feeding scheme which hands out 3000 meals a day.
Image: Aron Hyman

Local radio host Dennis Bogenhagen was one of several people who brought last minute produce for the day’s soup distribution to one of the collection points.

“When you go to the poorest communities you can see how badly this food is needed. We have pulled together before as a community when there were water shortages, but this is by far the biggest effort,” he said.

Organisers say that the local air force base also provides a few hundred litres a day.

The apples were brought in from Elgin, organisers tell TimesLIVE, in exchange for some protein in the form of mutton, beef and grain.

Green beans and courgettes from farmers donating from Porterville, apples and pears from Villiersdorp, fresh fruit from Grabouw. In this way soup kitchens and community feeding initiatives across the region are adding nutrients to their meals.

“We need dry rations, the stuff that gives your soup body, things like lentils, samp and stuff that adds nutrition. We have protein but we need vegetables,” said Antonie du Toit, one of the organisers who produces hundreds of litres of soup at his kitchen with donated food. 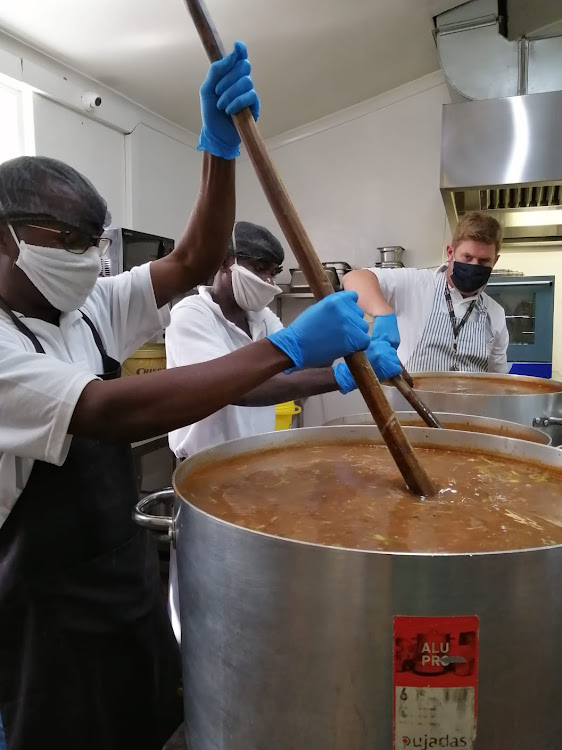 Antonie Du Toit's catering company kitchen has been running at full steam since the lockdown came into effect. Everyday he and his team produces hundreds of litres of soup.
Image: Aron Hyman

“We are not a vegetable area, vegetables come from Robertson. We swap with them and Swellendam, that’s where we get vegetables. Fruit for vitamins we get from the other towns,” he said.

“We will call the various churches and ask them who their co-ordinators are. They’ll call around and ask where he can get what we need,” said Du Toit.

“My business is at the point of bankruptcy. It’s so ironic, it’s all the restaurants who are opening their kitchens now. They have clean and sanitary kitchens with people who know how to cook and keep an environment clean,” he said. 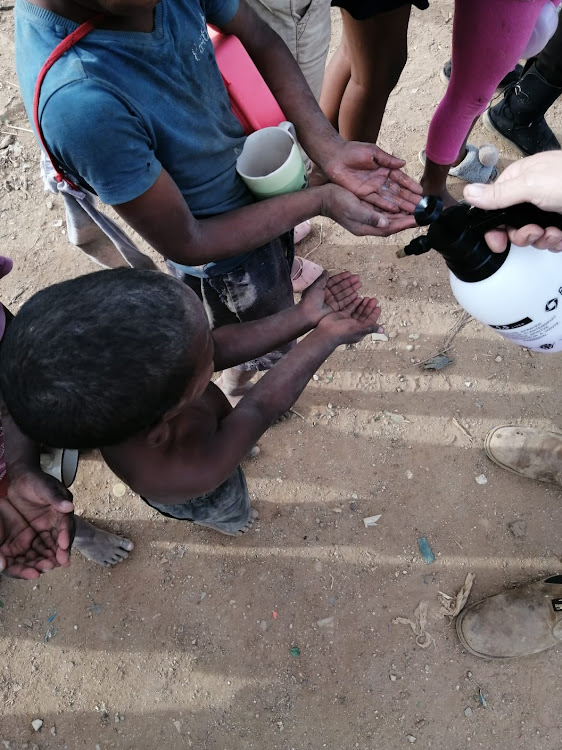 Tiny hands wait to be sanitized. Bredasdorp's informal settlement is situated next to the local landfill. For now other diseases contracted due to poor living conditions pose a greater risk to these children that COVID-19, which hasn't reached the town yet.
Image: Aron Hyman

Du Toit and the few men working to prepare the soup are not being paid and he said the money coming in was barely enough to keep the lights on and the gas bottles from running empty.

“We hope we’ll get something from the UIF. We’ve also applied for grants. There are loans available, but at rates I’ll never be able to repay,” said Du Toit.

But he is inspired by how the community has rallied together around this cause.

“Our government knows that the ingrained goodwill of people is always there to fall back on. The first three weeks you don’t have to panic, I swear they know it. Kitchens will open, people will ask how they can help, you’ll always have that three weeks, then the money is finished, that’s when the state needs to support,” said Du Toit.

Hundreds of residents queued at seven points in Bredasdorp’s township district to receive what would for many be the only meal of the day. 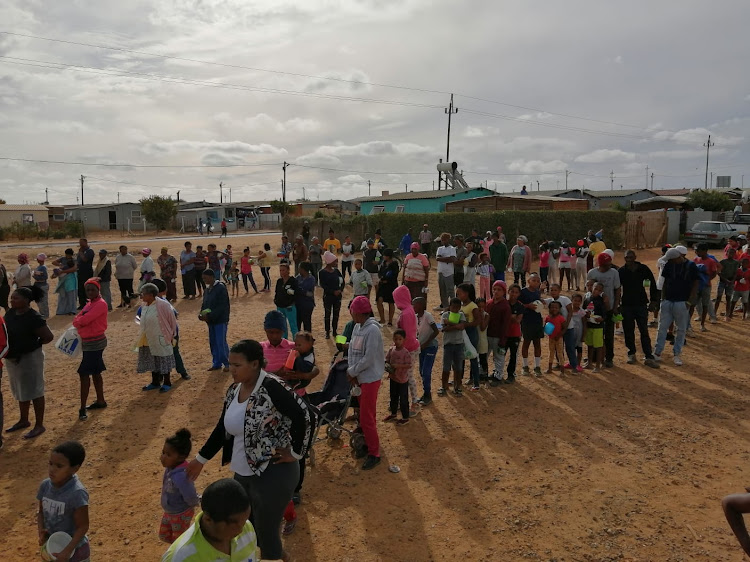 Hundreds of residents stand in several queues and wait for the arrival of volunteers to arrive with food at 3 pm each day. The people are orderly and patient. There is more than enough to go around.
Image: Aron Hyman

Volunteers stood with ward councillors and politicians from across the political spectrum who helped to distribute the food. None of them wear party regalia, this is not a time for politics.

ANC councillor Raymond Baker was one of the volunteers who helped distribute soup from the back of a bakkie.

“Many people have no jobs and many companies who can’t operate have indicated that they can’t afford to pay their workers any more. We are incredibly grateful that we are able to provide food for all these people through the help of the churches and this initiative. You can see how many people there are here,” he said.

“The need is increasing and at this stage we are giving about 2,000 people food per day at eight distribution points,” he said.

The overall initiative provides around 3,000 meals a day and the organisers are attempting to feed the youngest and the elderly first.

“This is the biggest feeding scheme here at the moment. If it wasn’t for all these people coming together it would have been a very dark time in this community,” said Baker.

Fransiena Filander was one of the elderly residents standing in the queue for her daily bread. She said that she never thought there would come a day when she would have to stand in a queue for the only meal she would eat for a whole day.

“One day my children told me to come and get food. The first day they started handing out food, I came to fetch. There is no other alternative, this is all we have to eat,” said Filander.