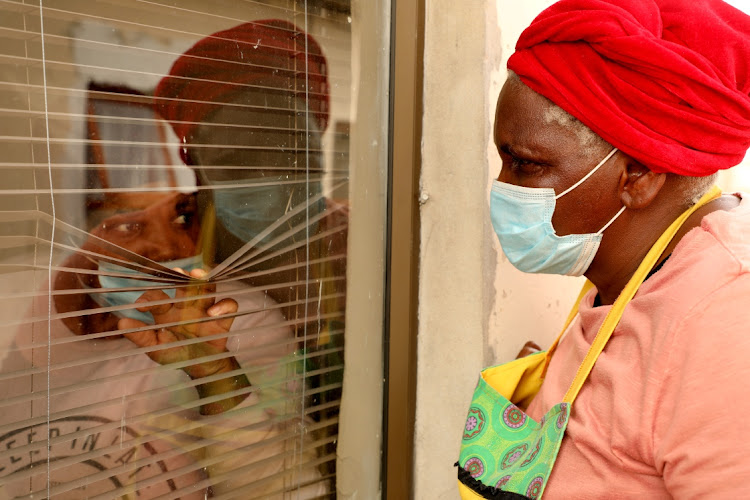 Mother speaking to her daughter in self isolation. Family members tested positive for Covid-19 and are self-isolating in the back in a flat..
Image: Fredlin Adriaan

I miss being able to share a meal with my family where we’d make jokes and enjoy each other’s company  — now we have to talk behind a glass window.

That was the sentiment of Sifiso Matanga, 29, who lives in Kwazakhele, Port Elizabeth, with 11 family members at his aunt’s house, reports HeraldLIVE.

The split in the family came when they discovered four members of the family had tested positive for Covid-19.

Three of the family members who have tested positive are living in outside rooms in the yard while those who are negative are staying in the house.

The fourth member of the family who is positive is self-isolating inside the house.

Matanga lives at his aunt Bongiwe Sofeke’s house in Boxongo Street in Kwazakhele, where Sofeke takes care of her 80-year-old aunt, her brother’s son and her children.

Sofeke said: “My daughter’s boyfriend is a correctional worker at St Alban’s Correctional Services; he tested positive for  Covid-19 and she contracted the virus from him.

“There were nurses that arrived at our home to test us and four of my children tested positive.

“I was so devastated because three are working and they help to contribute towards our livelihood.

It's time to mobilise NGOs in response to Covid-19 crisis

The score of Covid-19 globally, means that no single agency can work alone in responding to the pandemic, to control and mitigate its impact .
Opinion
1 year ago

“It was my children who encouraged me, saying that two of my sisters had HIV [and] we accepted them. They accepted their statuses quicker than I did, I was not OK.”

Sofeke said she relied on social media to communicate with her children using voice notes.

She said not only had the illnesses made life difficult but discrimination had also played a part.

She said as she had to cook for her children she had visited a local store to shop but had run into trouble there.

“A woman told a security guard in a retail store when I went to get groceries that there were people with coronavirus in my house. My temperature was checked.

Africa's lack of access to Covid-19 tests could undermine the global fight against the virus, says the head of the Africa Centres for Disease Control ...
News
1 year ago

“We have no groceries, it’s nearly half-past 12 and they haven’t had anything to eat,” she said.

She said she could not sleep when her nephew Matanga had chest pains on Monday night and came to her window in pain.

Matanga said he was hurt that he could only communicate from behind a glass window in his flat while his family was in the house.

He said he missed joking with his family while enjoying a meal together.

“It really hurts that I can’t be near the very same people who understand what I’m going through. I wish we could be together.

“They say our street has the virus. It is such ignorance that scares us even more,” he said.