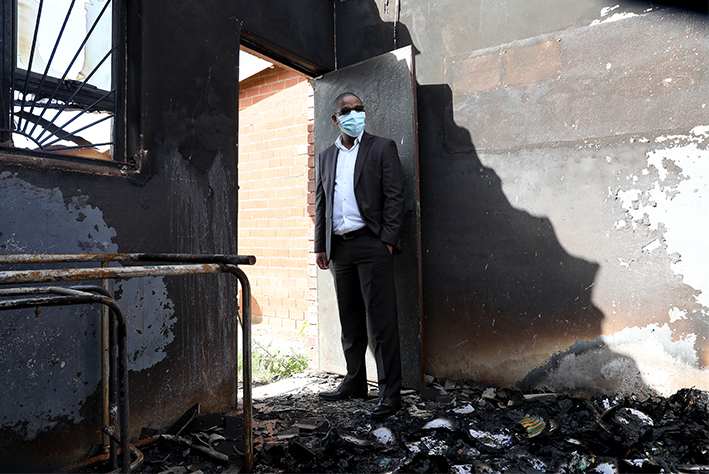 KwaZulu-Natal education MEC Kwazi Mshengu says the continued burning and burgling of schools in the province is part of a ploy to get the government to hire private security.

“What is clear in our minds is that we are dealing with a criminal syndicate which is trying to communicate a particular message to the government. We suspect that this syndicate is not far from the economic interests and demands we continue to get from people who say until you hire private security to guard your school, we will continue to have these burglaries and burning of schools,” said Mshengu.

He was speaking at Mzuvele High School in KwaMashu, north of Durban, on Wednesday, after a classroom was set on fire at the weekend. Since the start of the lockdown, more than 225 schools in the province have either been set on fire or burgled.

“It is clear now that it is a syndicate because as you can see they simply burnt the school, nothing of real value was taken but they left so much damage. This morning I was informed that another school in Umzimkhulu was burnt last night, there was nothing stolen but the school was set on fire. It is clear now that this criminal syndicate is doing whatever it can to communicate this message to the government. There just can't be someone who wakes up and decides to burn a school just for fun,” he said.

KZN Education MEC Kwazi Mshengu says he is frustrated by the lack of convictions in school vandalism cases. He was speaking at a school in KwaMashu, Mzuvele High school, that was torched on Saturday @TimesLIVE @yasantha pic.twitter.com/yn52IhDQua

Mshengu also expressed his frustration with the conviction rate of people committing these crimes. He said that to date only nine people had been arrested in connection with school vandalism and there have been no convictions.

“We are arranging a meeting with the minister of justice, comrade [Ronald] Lamola, because we want to raise our frustration to say there has never been a single conviction on any case relating to the vandalism of our schools,” he said.

“Yes, there have been suspects arrested but there has not been a single conviction. All that happens is that they are arrested and given bail and roam around our streets. It's quite frustrating because it means “while we continue to call on communities to play their part but also as government institutions, we are unable to send out strong messages that crime does not pay and if you are caught you will be dealt with,” he added.

Meanwhile, police spokesperson Capt Nqobile Gwala said that a case of arson and malicious damage to property was being investigated by KwaMashu police.

Seven people believed to have been involved in break-ins at residences and school properties in the Mankweng area have been arrested, Limpopo police ...
News
2 years ago
Next Article