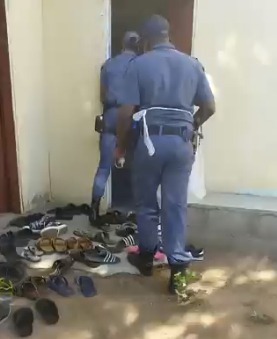 Police ordered worshippers to "get down" and made derogatory remarks.
Image: Twitter/@Abramjee

Police minister Bheki Cele has apologised to the Muslim community for blasphemous remarks made by officers during the arrest of Muslim worshippers for breaking lockdown regulations.

Cele had “taken note of a video clip circulating on social media” which had subsequently been confirmed by the SAPS as depicting the arrest of about 24 worshippers on Saturday at Masibekela in the Mbuzini area in Mpumalanga.

“The group was arrested for contravening the Covid-19 Disaster Management Lockdown Regulations in relation to the prohibition of gatherings,” said police spokesperson Brig  Mathapelo Peters.

“Minister Cele has issued an apology to the Muslim community for the blasphemous remarks during the arrest, a matter that is currently under an urgent investigation by the SAPS to establish the identity of the person behind such sacrilege.”

Cele said police had a constitutional obligation to enforce the laws of the country, “a duty to be executed within the confines of the same laws, applied with no prejudice against any gender, race or creed”.

The Council of Muslim Theologians — the Jamiatul Ulama South Africa — said earlier that though the congregants were wrong to gather, they were appalled by the conduct of the police whom they said should be investigated by the SA Human Rights Commission.

Since the start of the long weekend, police have arrested 41 congregants at two separate religious gatherings.

The tactical response team arrested 17 men who had converged in a building in Pretoria West in what appeared to be a religious gathering.

A 43- year-old pastor told his congregants not be afraid of "lightning" when the police were arresting them for allegedly violating lockdown ...
News
11 months ago

Minister Bheki Cele warned on Sunday that police had "no choice but to enforce the law" if the lockdown regulations were flouted for religious ...
News
11 months ago
Next Article