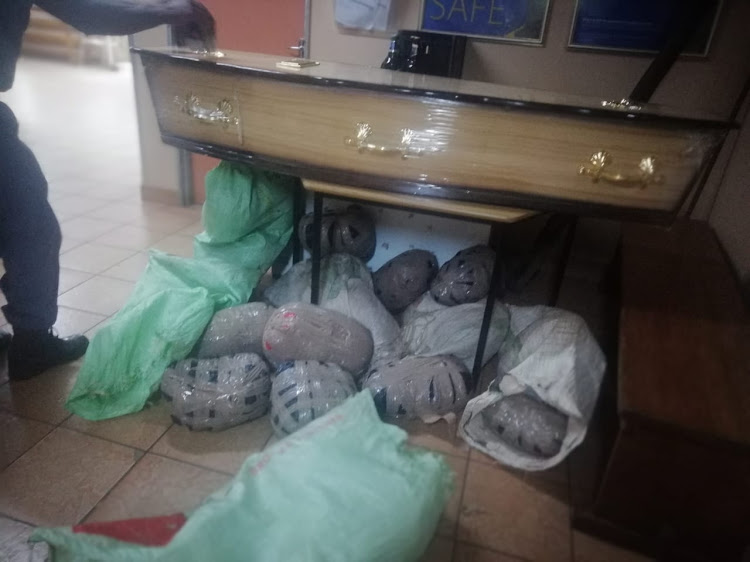 In total 30 bags that weighed 80kg were recovered
Image: supplied

Two men were arrested after they were found ferrying 80kg of dagga in a coffin in northern KwaZulu-Natal on Saturday.

A police source close to the investigation said Pongola Visible Police (Vispol) members had been conducting a roadblock on the N2 in the Mavalane area when a vehicle approached and switched off its lights.

“Police rushed to the vehicle and asked for a permit to travel. They produced a vehicle pass permit which identified them as a funeral parlour carrying a corpse.”

Police searched the vehicle to make sure that there was a coffin and corpse inside.

“When searching in the presence of the motorist and the passenger, members opened the coffin and found many parcels of dagga wrapped in Sellotape. Underneath the coffin there were bags of dagga as well.”

Alleged hijackers stalking the locked-down streets of Browns Farm, in Cape Town, met their match on Sunday.
News
2 years ago

The vehicle registration was circulated and it was found to belong to a car rental company in Boksburg.

Both men, a 34-year-old South African and a 32-year old asylum seeker with a temporary permit from the Congo, were placed under arrest.

“They have been charged with possession of dagga, fraud and contravening the regulations of the Disaster Management Act.”

Both men are expected to appear in court soon.