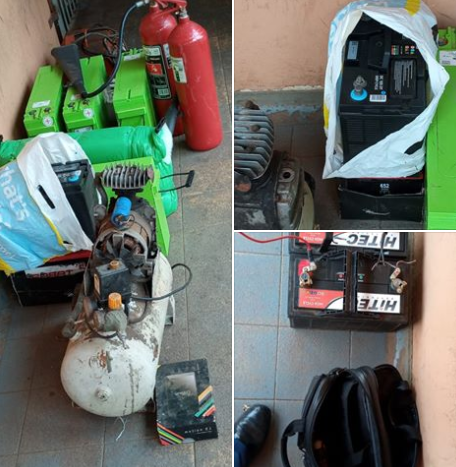 Some of the suspected stolen property recovered by police in Hankey, Eastern Cape..
Image: Supplied

Ten suspects have been arrested in Hankey in the Eastern Cape for being in possession of suspected stolen property including tower batteries, network regulators and compressors with an estimated value of more than R100,000, police said.

The suspects, aged between 21 and 51, were arrested in the early hours of Friday, said Eastern Cape police spokesperson Capt Khaya Tonjeni.

“The team received valuable information about stolen property being stashed in Centerton in Hankey. The ten suspects were arrested after backup batteries, network regulators, compressors and other electronic equipment were found in the possession of the suspects,” Tonjeni said.

The suspects are due to appear in the Hankey magistrate's court on Tuesdayon a charge of possession of suspected stolen property.

Two East London SBV cash-in-transit security guards who applied for "sick leave" and were later arrested while robbing a Fidelity cash truck in ...
News
1 year ago

The fury caused by the murder of 8-year-old Tazne van Wyk burst from the Goodwood magistrate's court onto the streets of Parow and Goodwood on Friday.
News
1 year ago

Eating out overseas: 5 places where it's cheaper than SA

Good news for the passport gang: there are some exotic places where a restaurant meal costs less than here in Mzansi.
S Mag
1 year ago
Next Article