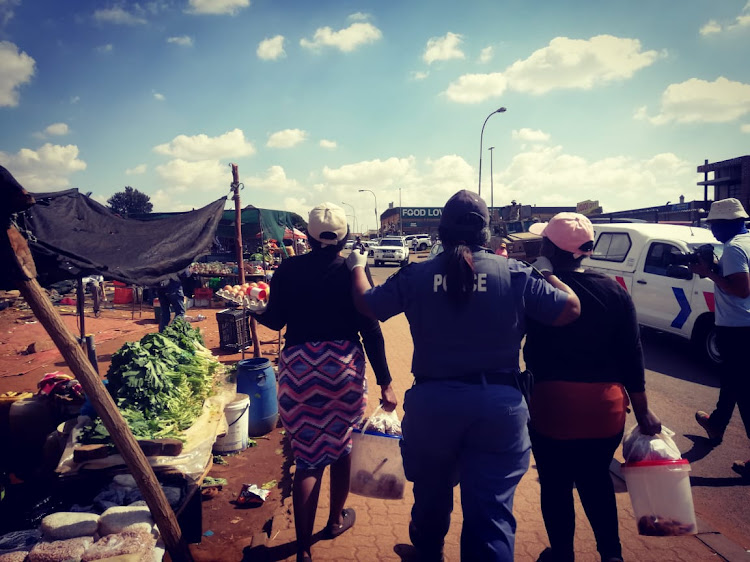 Two street sellers are led to a nearby police van in Soweto after being caught selling peanuts, boiled eggs and biscuits in contravention of Covid-19 regulations.
Image: Nonkululeko Njilo/TimesLIVE

Two Dobsonville women selling peanuts, boiled eggs and biscuits in the Soweto suburb have been arrested under Covid-19 regulations after their pleas fell on deaf ears.

A law-enforcement operation was held in Soweto on Thursday in response to concerns that lockdown rules were not being followed by the community, with life as normal evident in some areas.

“Why are you still trading without permits? Did you not hear it is illegal to trade without a permit?” police spokesperson Capt Kay Makhubele asked the women.

One responded: “We heard, but it is the hunger. We couldn't stay at home any longer. Our families are hungry.”

Makhubele nodded and the pair were arrested by a female officer, who instructed them to co-operate. They were escorted to a police van while they kept apologising.

Another female informal trader was arrested on Thursday for allegedly selling atchaar without a permit in Dobsonville.

She was overheard telling police she was no longer selling and had been waiting for taxi operations to commence in the afternoon so she could catch a taxi home.

She is due to appear in court on Friday.

Since the start of the hard lockdown on March 27, prior to Friday's arrests, Gauteng authorities had arrested a total of 15,000 people for offences under the Covid-19 regulations.

Angry community members protested outside Ntunjambili Hospital near KwaDukuza, north of Durban, on Thursday against the admission of Covid-19 ...
News
2 years ago
Next Article