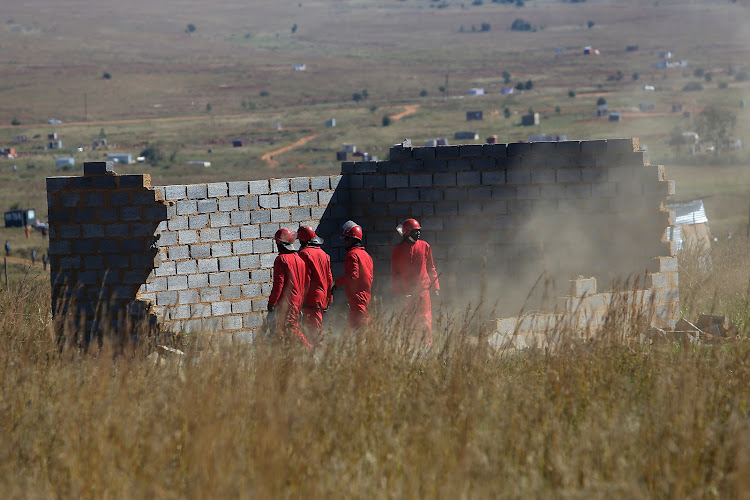 One of the residents of Lawley, south of Johannesburg, whose 11-roomed house was razed to the ground during last week's evictions says she spent close to R500,000 on the incomplete property.

Mpho Mufadi, who is an accountant, moved into Lakeview informal settlement in Lawley in 2018 and she has been gradually building her home since then, until it was demolitioned by the Red Ants last week Thursday. By that time the house was "90% complete".

Mufadi's lawyer, Lucky Mhlanga of Precious Muleya Attorneys, told Sowetan that on the day of the demolition, Mufadi was compelled to take care of her sister Daphney Madzhasi who had collapsed due to trauma.

Mhlanga said Mufadi had already purchased material to complete her home, but was delayed by the lockdown.

"She is now stranded. She is traumatised by the whole thing. Every time we speak about this, she breaks down in tears. The demolition of her home has really traumatised her. A friend of hers gave her a place to sleep. She rescued nothing from that home. She was not given an opportunity to take some of her belongings," Mhlanga said.

Ntsikelelo Gubana of Lakeside View informal settlement in Lawley, south of Johannesburg, watched in despair as the Red Ants demolished his uncle's ...
News
1 year ago

Busi Nhlapo held her head in her hands when the Red Ants began demolishing her neighbour's house in Lakeview informal settlement in Lawley, south of ...
News
1 year ago

Mhlanga told Sowetan since the demolition, two cases have come before the South Gauteng High Court against the City of Johannesburg and were both dismissed.

The lawyers who lost in their first bid are now preparing to challenge the evictions before the Constitutional Court.

They want the apex court to allow them to approach it directly; declare the eviction illegal and for the respondents to rebuild the demolished homes within 24 hours of the order of the court.

Mhlanga said he was already in contact with the other lawyers representing other residents.

"We are saying the court must compel the respondents to provide temporary shelter and mobile toilets for the people whose homes were demolished," he said.

"There are people who left the province immediately when the president announced the lockdown. Their homes have been demolished while they are away.

"What is going to happen when the lockdown is relaxed and they come back only to find that their homes have been destroyed?

"Where are they going to go?" he asked. Mhlanga is representing about 800 residents from the informal settlement.