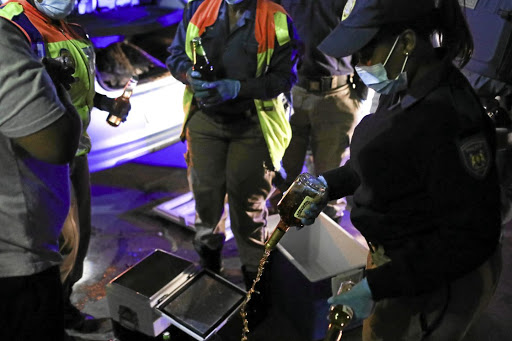 The government's total ban on the sale of alcohol during the national lockdown continues to bear positive results for hospital trauma centres and medical staff who have seen massive reductions in the number of injuries and deaths that
occur as a result of alcohol consumption abuse.

According to Dr Mduduzi Gama, a medical officer in the accident and emergency department at Addington Hospital in Durban's inner city, the total number of trauma patients they see in a 72-hour period during the lockdown is what they usually saw in a 12-hour period on a typical weekend.

"Before the announcement of the national state of disaster we had a total of 158 trauma cases, which was 47 [Friday], 50 [Saturday] and 61 [Sunday] patients respectively."

But after the announcement of the initial nationwide 21-day lockdown on March 26, the hospital saw a significant reduction in numbers in the first weekend of the lockdown.

Similar downward trends have been reported in various government hospitals.

Anesthesiologist at the Sebokeng Hospital, Dr Himmel Machava, described the ban as a "necessary evil".

The stringent regulation of banning the sale of alcohol during lockdown has led to a major decline in violent crimes.
News
1 year ago

"We are facing an enemy that does not discriminate between rich and poor, but
because of the living conditions of the poor and the reality that South Africa has the highest HIV pandemic in the world [which means a vulnerable immune system], the poor are at the greatest risk. The ban is therefore a necessary evil as it were. If people can stay at home as instructed, we will defeat this enemy, and the ban will be lifted," he said.

Meanwhile, police minister Bheki Cele, addressing journalists in Durban yesterday, said the ban of alcohol during lockdown has led to a major decline in violent crimes.

The death toll of people with Covid-19 has risen to 65.
News
1 year ago

Sandton, Houghton, Orange Grove, Alexandra and Wynberg are among the Covid-19 hotspots in Gauteng, with a combined 227 positive cases as of Wednesday.
News
1 year ago
Next Article