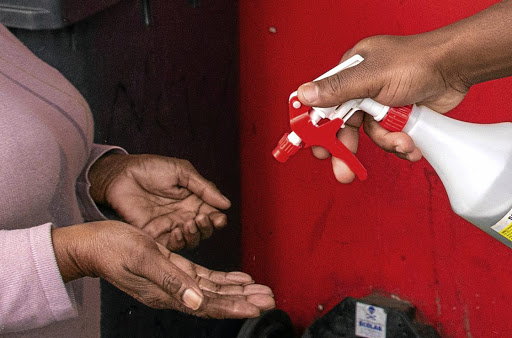 SABS says people should be careful not to buy uncertified hand sanitisers. Sanitisers are in demand due to Covid-19./ Gallo Images/Roger Sedres

The South African Bureau of Standards (SABS) has warned the public not to buy uncertified products as hand sanitisers are increasingly flooding the market due to the outbreak of coronavirus.

Several companies and individuals have been creating their own hand sanitisers to capitalise on the increasing demand of the products.

Sanitisers including DIY's (Do-it-yourself products) emerged during the lockdown with political parties such as the EFF promoting their own branded products.

TV personality and businesswoman Minnie Dlamini also announced that she was working with international company Diageo in producing a hand sanitiser.

According to the SABS, certified sanitisers or products bear the SABS Approved logo and should have one or both the SANS 490 and SANS 1853 marks below the logo.

Hand sanitiser sold out? Expert cautions not to try make your own

The spread of coronavirus and the measures government has taken to prevent a full-on outbreak in SA have caused some people to enter panic mode.
S Mag
1 year ago

Diamonds are forever‚ but not fresh water which is in short supply at this year's mining indaba at the Cape Town International Convention Centre.
Business
3 years ago

The SABS could not state if any of the celebrity-driven products were certified or not. But it admitted that it has certified a wide range of products such as disinfectants, sanitisers, medical equipment and masks.

The process of acquiring certification of SABS can take about two weeks for established companies which have the right resources while for DIYs it takes longer due to sometimes the inconsistency of measurement of ingredients.

The SABS further cautioned the public to refrain from buying uncertified products because they could be putting their lives in danger.

Lead administrator at the SABS, Jodi Schultz said: "The SABS has received numerous queries regarding the fraudulent use of the SABS Approved mark on products and while we have taken legal action against the illegal use of our mark, we urge South African consumers to remain vigilant and not to use untested and uncertified products".

Schultz said uncertified products could be dangerous for a number of reasons that include: adverse reactions to humans and the environment, the harmful effects of unidentified ingredients, bacterial and microbial impurities as well as simply just not being suitable for use on oneself.

"The product must clearly stipulate the batch number, the expiry date, the ingredients and the percentage of the alcohol used. SABS is also committed to work with other regulators such as the national regulator for compulsory specifications, the department of health and the South African Health Products Regulatory Authority to ensure that safe, tested and certified products are sold within South Africa," he said.

The standard testing and accreditation body said it was aware that there were a large number of manufacturers who were fraudulently using the SABS Approved mark on their products.