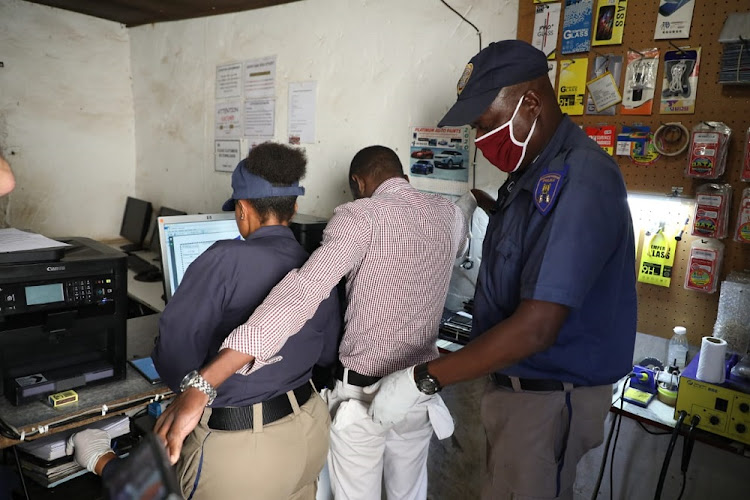 One person has been arrested in Protea Glen, Soweto,  for producing fraudulent permits for informal traders.

The man was arrested on Monday at about 1pm during a sting operation involving Johannesburg metro police.

Under cover EMPD officers gave the man  R300 worth of identified bank notes to buy a permit. After the transaction was concluded, they then pounced on the backroom of the house.

“We arrested one person in relation to the fraudulent document.  Another person was arrested for contravening the lockdown regulations. He was at an internet Café working on a computer and that is not allowed,” said City of Johannesburg spokesperson Nthatise Modingoane.

A computer was confiscated and  fraudulent permits were also found at the house. The man arrested  also produced permits which enable people to move from one province to another.

Modingoane said  JMPD officers have noticed that a number of informal traders were producing  documents which reflected a certain councillor’s name.

A man was arrested in Protea Glen for fraudulently producing informal trading and movement permits from the City of Johannesburg during the lockdown. Video: @ttmbele pic.twitter.com/4CgfxGv4FA

The councillor was  called to verify if he was aware that his name was being used in the documents. When the councillor indicated he had no knowledge of the documents, the house was located and a sting operation was set.

Modingoane said the city is yet to establish how many of these illegal permits had been produced.

The man arrested sold the same document  to all those asking for it, only changing the name of the informal trader and the number of the permit.

Government allowed informal traders to do business only with permission given by municipalities. The City of Johannesburg has been issuing the permits but to informal traders who are already formally registered with the council.

Any other person who does not have an already existing permit does not qualify to get the permit to trade during the lockdown.

A 44-year-old taxi owner allegedly behind arranging fake permits to allow  a number of taxis to travel   from the Western Cape to the Eastern Cape ...
News
1 year ago