Food to be given to those in need, not along political lines, David Makhura says 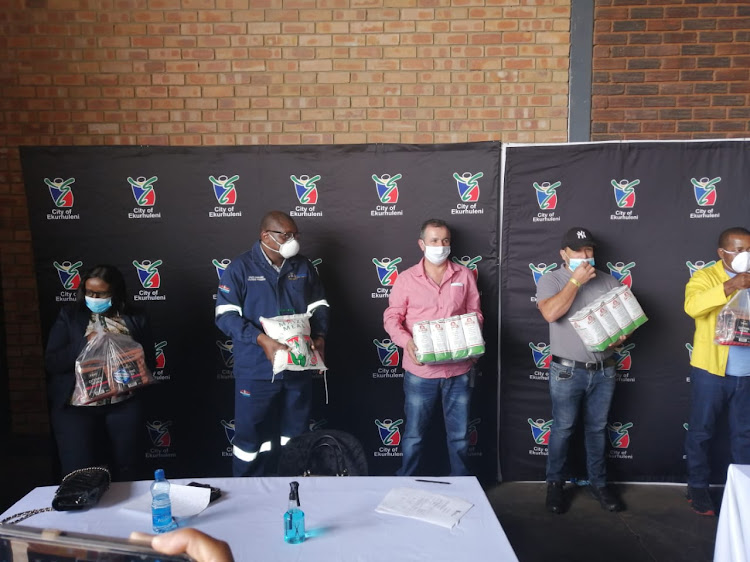 Gauteng premier David Makhura (in blue overalls) at the opening of the Springs food bank in Ekurhuleni on Tuesday where he said casual, or piece, workers were 'falling by the wayside'.
Image: Ernest Mabuza

The beneficiaries of food supplied by the government during the Covid-19 lockdown were not identified arbitrarily but according to existing government criteria based on need, Gauteng Premier David Makhura said on Tuesday.

Makhura said this during the official opening of Ekurhuleni's central food bank in Springs.

The food bank has received donations, mainly of food and sanitisers, from businesses in the area, and these donations will be distributed through a ward-based system to the poor during the lockdown.

Makhura said councillors would not be involved in the distribution of food, but would help to identify families in need.

"We want to remove politicians from the food-distribution system. In Tshwane, there were accusations that food was distributed along political lines."

Makhura said the government had distributed food parcels - to last for a month - to 72,000 households since the start of the lockdown on March 27.

Food parcels were distributed to 2,000 households in the province every day, Makhura said.

Police fired rubber bullets this morning to disperse residents of Setjwetla in Alexandra who had gathered near the Marlboro Gardens Secondary ...
News
1 year ago

Makhura said food supply to the poor was an important weapon in the fight against the spread of Covid-19.

He said that in Gauteng, about 20% of the population, or 3-million people, were food insecure, meaning they were guaranteed food for only four to five days in a week.

Makhura said the list of the indigent in the province included assessments by social workers.

"The list is not informed by political patronage. It is based on need."

Makhura said in the past two weeks, Gauteng was receiving requests from more people who used to work but now were in need of help.

"People who used to do piece jobs are now falling by the wayside," Makhura said.

Ekurhuleni mayor Mzwandile Masina said the municipality would distribute the parcels to the indigent registered with the city, and would use officials who were dealing with social-development measures.

"However, we have taken note that over and above the indigent database, we will use the provincial hotline to identify more people in need," Masina said.

Some residents of Port Elizabeth threatened protests and to disrupt the Nelson Mandela Bay Municipality from distributing food parcels to informal ...
News
1 year ago

The lovebirds, who are known as Somhale, donated Makro vouchers worth R500 to 200 families. Mhlongo said they were planning to donate 200 more gift ...
News
1 year ago
Next Article