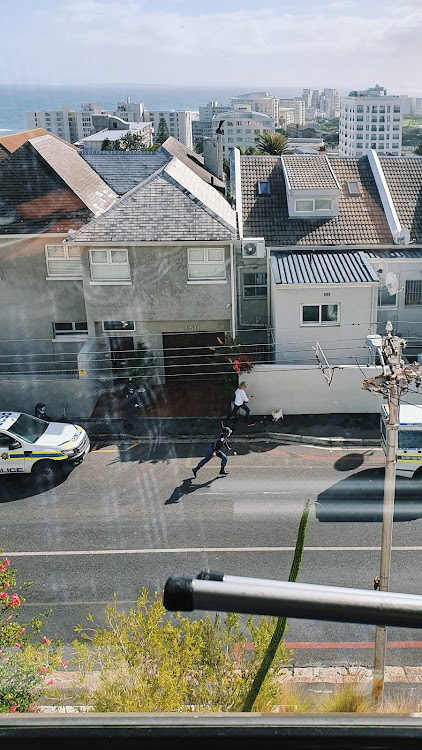 A picture taken from the window of a Three Anchor Bay room shows a woman bust while walking her dog in breach of lockdown regulations.
Image: Candice Botha

It's a picture that has captured many South Africans' attention.

A police office runs in the road between two law enforcement vehicles while a blonde woman — with her fluffy white dog on a lead — appears to try to run away.

The picture was taken on Easter Sunday in Three Anchor Bay, Cape Town, at about 10.15am.

The woman who took the image and posted it on her Instagram account, freelance copy writer Candice Botha, said she and her fiancé heard a commotion outside their window.

“We went to the window to check if everything was OK.

“Three cop cars had pulled over with at least seven cops following a lady that was walking her dog. When we looked out, she was trying to walk away from them, saying something along the lines of 'she lives right there and she's just going to go home'.

“I think she was frightened by the number of police, and in her panic, she repeatedly tried to get away from them. One policewoman grabbed her shirt as she was trying to run away,” said Botha.

She said about half a dozen officers surrounded the woman and were trying to talk to her.

“She sat down on the ground and didn't want to co-operate. Finally, she ran down the alleyway out of our line of sight and was followed by police on foot and in a van.

“We never saw the arrest, but after a few minutes, a police van came back about the corner with her sitting in the back,” said Botha.

For newlyweds Dumisani Zondi, 46, and Thabile Ngcobo, 36, their wedding day will forever be etched in their memory as a day to remember for all the ...
News
2 years ago

“A 52-year-old woman was arrested and fined R1,500. She has an option to pay the fine at the nearest police station, or go to court on an assigned date to contest the charge. I don't know if she'd paid or not,” said Naidoo on Monday.

Describing what happened from the SAPS report, Naidoo said police were on patrol for breaches of coronavirus lockdown regulation breaches.

“They [police] were getting complaints in that area. Complaints of people walking about and walking their dogs and so on. They were on patrol [on Sunday] and saw this woman indeed walking her dog. The complaints were not specifically about her, but about the area in general,” he said.

Naidoo added that the woman did try to get away from the officers, but didn't get far.

Botha said that she and her fiancé were concerned for the woman.

Botha said that it appeared most people were following the rules in the area.

She said being in lockdown felt “a bit like we're living in an Orwell novel”.

“But I'm 100% supportive of the lockdown and flattening the curve,” she said.

A Cape Town man will on Tuesday appear in court after he was arrested for a Facebook video claiming SA's test kits for the coronavirus were ...
News
2 years ago
Next Article