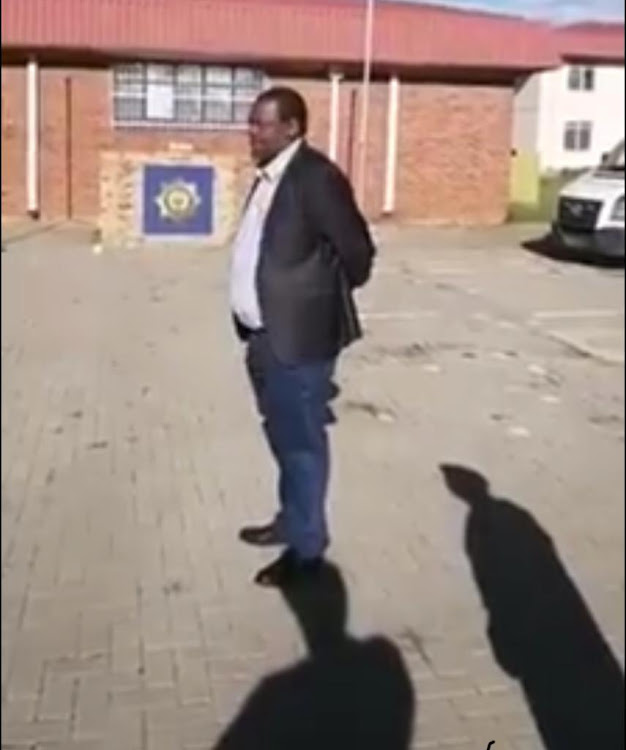 Welkom mayor Nkosinjani Speelman has been suspended for using a racist slur while addressing soldiers on Monday regarding the coloured community of Bronville.
Image: Screengrab of video

An apology is not enough, the SA Human Rights Commission says, announcing it has opened an investigation into a Free State mayor, Nkosinjani Speelman.

Matjhabeng mayor Nkosinjani Speelman was suspended two days ago for using racially offensive language while addressing soldiers on the enforcing of lockdown rules in the mining town. In a statement, the ANC in the Free State said Speelman's comments were “racist and regrettable”.

The SAHRC said the mayor had referred to members of the coloured community in Bronville, Welkom, “using words that are not only offensive but may also negatively touch on their dignity as human beings”.

“The SAHRC views mayor Speelman’s utterances in a very serious light. For this reason, the commission is of the view that mayor Speelman’s apology would not suffice and has thus initiated a full, own initiative, investigation to be conducted by the secretariat into the utterances of the mayor and the report to be presented to commissioners at the earliest opportunity.”

Having listened to the full video, the commission said it was “appalled that mayor Speelman, a government official and community leader, also encouraged soldiers not to hesitate to shoot and to brutalise the people of Bronville.”

“This is a call on the soldiers to violate the constitution and the rights of the community to life and freedom and security of the person. The commission condemns this conduct in the strongest terms and hopes that the president [Cyril Ramaphosa], who had earlier painstakingly pleaded with the soldiers and SAPS members not to use violence against, but must assist communities, to hold accountable those who repudiate his instructions in this regard.”

The municipality's performance is now also in the spotlight.

The SAHRC said it has been made aware of the community’s complaints relating to poor service delivery. “The commission will launch a full investigation into these once the national lockdown ends.”

Welkom mayor apologises for ‘boesman’ slur in speech to troops

Welkom mayor Nkosinjani Speelman has apologised for a racially offensive word he used while addressing soldiers on the enforcing of lockdown rules in ...
News
1 year ago
Next Article