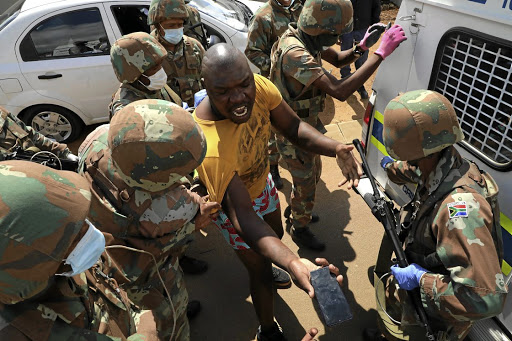 Soldiers drag a Daveyton resident towards a police van after they accused him of defying instruction to stop filming and stay in his home. /ANTONIO MUCHAVE

Police and the army had their hands full trying to enforce the national lockdown regulations in Daveyton, east of Johannesburg, yesterday.

Police had expressed concern that some of the residents were not complying with lockdown's strict measures calling on people to stay in their homes.

Yesterday, the police, the army and the Ekurhuleni metro police embarked on an operation in the townships, targeting areas considered to be problematic.

At Mkhalazenke informal settlement, law enforcement officers wrestled a 30-year-old man who allegedly insulted a soldier when told to stop filming the patrol and stay inside his house.

The man resisted arrest and tried to fight off the officers who wanted to lock him inside a police van.

Police spokesperson Col Mac Mngomezulu said they had to shut down numerous informal trading businesses that operated without permits.

Mngomezulu said although most businesses that were not supposed to operate were found closed, people refusing to stay in their homes was a bigger challenge.

"We have to enforce the law, as if people do not understand the serious state the country is in," Mngomezulu said.

"We have arrested four people due to noncompliance and one of them we arrested for possession of an illegal firearm."

Mngomezulu said people were roaming the streets in contravention of the lockdown rules.

He said police struggled to control the masses of traders who were allowed on the streets to sell food this week.

He also said the police were concerned about the legitimacy of the permits found on different individuals.

"We urge the municipality to make the permits more appropriate and unforgettable."

Mngomezulu said demarcation was also a problem in terms of informal trading because people sell everywhere, even in places not allocated to trading. He said a high number of children play on the streets unattended.

"Parents need to keep their children inside their yards. It's disappointing that children, being vulnerable as they are, parents allow them to be out on the streets despite the spread of the virus daily."

Police minister Bheki Cele has called on the police and soldiers to "push" people who are found galavanting on the streets and drinking alcohol back ...
News
1 year ago
Next Article