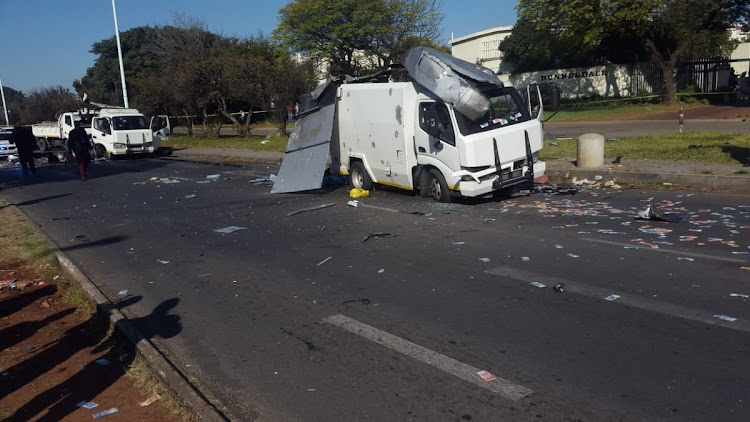 A man linked to crimes including cash-in-transit robberies, possession of suspected stolen vehicles and armed robberies was denied bail.
Image: @emergancy_task via Twitter

A man who police have linked to several crimes, including cash-in-transit robberies, possession of suspected stolen vehicles, and home and armed robberies, was denied bail on Wednesday.

David Mzamane Maluleka - popularly known as “Mdeva” - appeared at the Temba magistrate's court after his arrest in Soshanguve on a charge of possession of a suspected stolen vehicle last month, according to the Hawks.

The police unit's spokesperson, Capt Ndivhuwo Mulamu, said the case was not placed on the court roll last month but the “inconsistency” was being investigated.

“An immediate manhunt ensued which led to his arrest again on Tuesday at his residence in Danville, Pretoria West, by the Hawks’ Serious Organised Crime Investigation, Crime Intelligence and local detectives.

“Maluleka is alleged to have played a part in various cash-in-transit robberies in Pretoria north, Rustenburg, Tsakane, Rietgat and Pretoria west,” said Mulamu.

The 41-year-old was expected to remain behind bars until after the lockdown.

His case was postponed to April 17 for further investigation and a formal bail application.

Mulamu added that the suspect was also expected to appear before the Springs magistrate's court on Thursday – on pending armed robbery and possession of suspected stolen vehicle charges.

The Hawks have arrested a 40-year-old man from Whittlesea, Eastern Cape, for aiding and abetting four suspects who had escaped from custody.
News
2 years ago

Five people have died in bloody confrontations between police and an armed gang, following a cash-in-transit heist on the R503 from Mahikeng to ...
News
2 years ago
Next Article