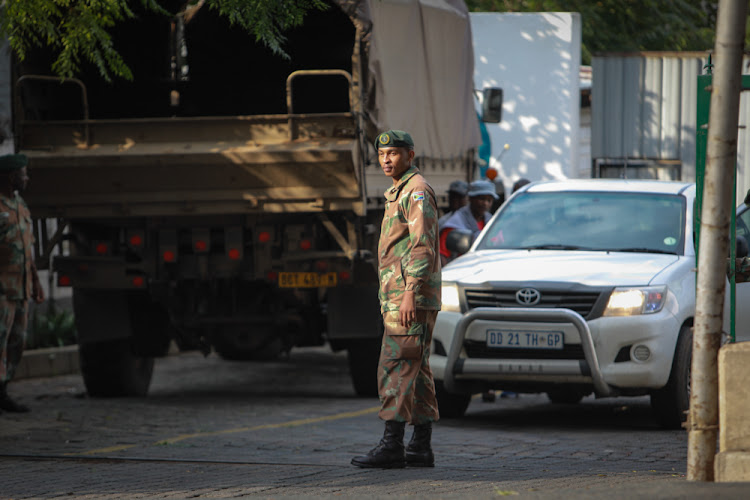 A soldier in the streets of Johannesburg
Image: Sebabatso Mosamo

Ekurhuleni Metro police department (EMPD) and the South African National Defence Force (SANDF) had their hands full on Wednesday as they tried to enforce the national lockdown regulations in Daveyton.

Police said the community has been disregarding regulations by refusing to stay in their homes.

The SAPS in Ekurhuleni, EMPD and SANDF, shut down numerous informal trading business that were operated without permits.

Police spokesperson Col Mngomezulu said although most businesses that were not supposed to operate were found closed, people refusing to stay in their homes was a bigger challenge.

"We have to always use enforcement as if people do not understand the seriousness of the current national state in the country. We have arrested four people due to non-compliance and out of the four we arrested, one person was in possession of an illegal fire arm," he said.

Mngomezulu said the challenge with individuals roaming around the streets became worse last week after the minister announced that informal traders could be permitted to trade.

"Now the problem has become that we cannot control the masses because if traders are allowed to sell, who are they selling to if people have been ordered to stay in their homes?" he asked.

In its application, the NGO had sought an order that alleged law enforcement brutality during the shutdown had violated the constitution
News
2 years ago

Mngomezulu also raised concerns about the legitimacy of the permits found with different individuals.

"We urge the municipality to make the permits more appropriate and unforgettable," he said.

He said demarcation was also a problem in terms of informal trading because people sell everywhere even in places not allocated to trading. He said a high number of children play on the streets.

"Parents need to keep their children inside their yards, it's disappointing that as vulnerable as children are, parents let them out despite the spread of the virus daily."

When Sowetan visited the operation, a man in his 30s, who had insulted the SANDF members, was arrested after he tried to fight the police upon instruction to stay inside his home at the Mkhalazenke informal settlement.

The man was seen wrestling soldiers and police after he was requested to stop taking a video of police in the street and stay in his yard.