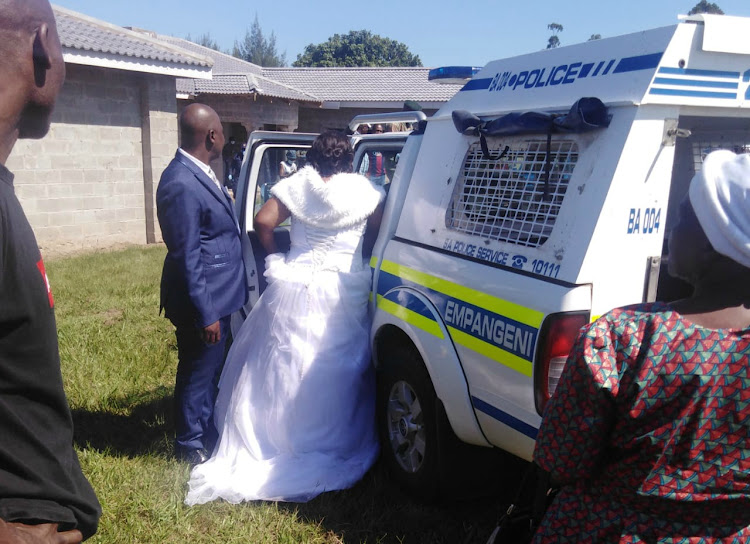 Dumisani Zondi, 46, helps his new bride Thabile Ngcobo, 36, into a police van on Sunday in Nseleni, northern KZN. The couple, their pastor and 50 of their guests were arrested for contravening regulations around the 21-day lockdown.
Image: Supplied

For newlyweds Dumisani Zondi, 46, and Thabile Ngcobo, 36, their wedding day will forever be etched in their memories as a day to remember for all the wrong reasons.

Zondi and his wife, together with the pastor who officiated their wedding and 50 of their guests, were arrested by police and soldiers on Sunday in Nseleni, northern KwaZulu-Natal, for violating the rules of lockdown.

Their wedding took place at a newly built church in the area, less than 2km from Zondi's family home.

A KwaZulu-Natal bridal couple will spend their first few hours as husband and wife behind bars after being arrested at their wedding on Sunday.
News
2 years ago

Speaking to TimesLIVE on Tuesday, a shocked Zondi said they were still coming to terms with what had happened.

The couple and pastor had been released on R1,000 station bail on Sunday, shortly after their arrests.

Their guests were released without paying bail.

“We didn't know it was against the law because we obtained an affidavit requesting that we hold the ceremony. We had 50 people at the venue excluding myself, the bride and the pastor and we observed social distancing.”

He said they were fortunate that police arrived after the nuptials were done.

“We had signed and only the reception, eating and cutting of cake remained.”

Zondi said he and Ngcobo had been together for about 20 years and planned to have their honeymoon in Durban.

“I had planned to take my wife on a honeymoon to Durban but that is also on hold because of the lockdown. The happiness of our wedding day was short-lived, it was supposed to be a happy day since we have been together for such a long time. It's a day that we have long been planning and saving for."

He said he went to the police station and obtained an affidavit saying was getting married on April 5 and that constituted a permit.

Under the Disaster Management Act, a permit is issued for  funerals and cremations.

He said they were still reeling from the shock.

“It hurt me. My wife is still not well because of what happened. We were not expecting to be arrested, we were really shocked when the police showed up like they came to arrest murderers.”

It is understood that the couple and pastor  are to appear in court on June 11, facing charges of contravention the regulations of the Disaster Management Act of 2002.

Disappointed couple forced to postpone wedding due to Covid-19 lockdown

Zonke Njokweni was supposed to marry the love of her life at the weekend, but the couple had to postpone their wedding due to the coronavirus ...
News
2 years ago

If Covid-19 cancels your wedding, you should get a full refund: consumer goods ombud

We should be heading into South Africa’s second biggest wedding season, but for many of the thousands of engaged couples who’ve been forced to cancel ...
News
2 years ago
Next Article