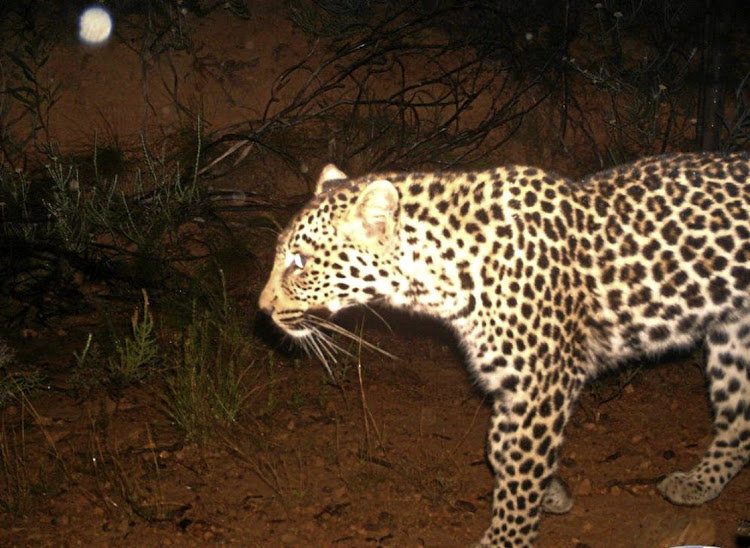 A Cape leopard on a wine farm in the Helderberg region photographed by a wildlife camera.
Image: Ken Wynne-Dyke

A leopard roaming a Franschhoek wine estate at night, captured by a motion-sensor camera while making a guttural rasping call, is among only a “few hundred leopards left in the Cape mountains”,  Jeannie Hayward of the Cape Leopard Trust said on Tuesday.

“This is a typical leopard call that sounds very much like sawing wood,” she said.

“Males and females vocalise with mating calls to attract the opposite sex, or with territorial calls to threaten individuals of the same sex to stay away.”

With more than half the countries in the world in partial or full Covid-19 lockdown, it appears animals are growing bolder about venturing into what is typically human territory.

However, Hayward said this leopard’s movements at L'Ormarins were “not out of the ordinary” for the greater Boland region.

“The majority of leopard photos come from camera traps in the mountain reserves. A large number of photos are also obtained by cameras deployed on private properties along the borders of protected areas,” she said.

“Leopards in the Cape mountains have huge home ranges which they continuously patrol. They don't 'live' in any one area for an extended time. It is not uncommon to only find photos of leopards on any given camera once every few months.”

They’re the kings of the jungle.
SebenzaLIVE
1 year ago

The increasing encroachment of humans on nature and the hunting of this sleek predator threaten its survival. The leopard is listed as vulnerable by the International Union for Conservation of Nature.

“Biodiversity-minded private landowners will play a crucial part in the conservation of leopards, their habitat and their prey in the greater Boland, where human activities almost complete surround the mountains,” said Hayward.

“Leopards in the Cape mountains have exceptionally large home ranges, in some instances tenfold larger than those in the savannah biome.

“It is of utmost importance to protect these last of the big predators — the apex predators in the Cape mountains — to still roam free in the Western Cape,” said Hayward.

Police searching for two lions after reported sightings in Westonaria

No missing lions have been reported on Gauteng's West Rand, police said on Wednesday.
News
1 year ago