We stole due to lockdown hunger: robbers post message after ransacking school 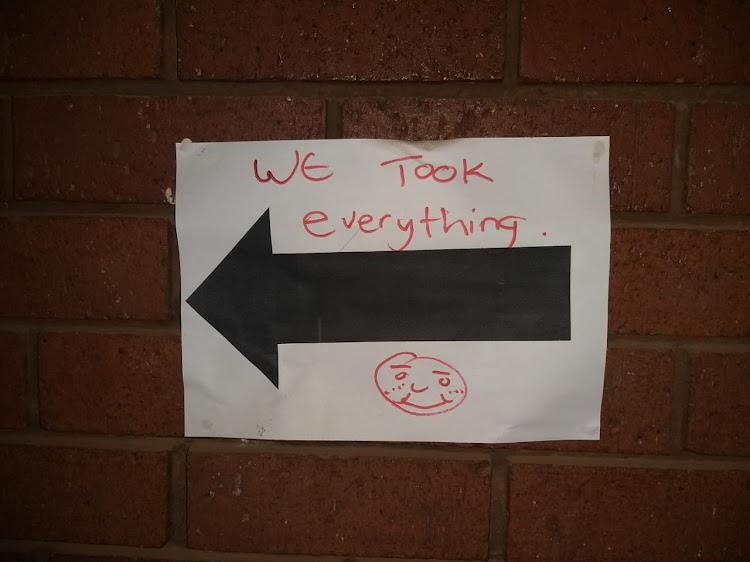 Thieves have left a note after making off with items from a number of schools.
Image: Supplied

"We took everything, we are hungry because of lockdown."

That was a message left by thieves in one of the five schools that were vandalised around Gauteng.

Education spokesperson Steve Mabona said criminals took advantage of the lockdown and school holidays to break-in and vandalise five schools in Gauteng. The five schools that were broken into are Mofolo Primary School in Evaton where criminals left classrooms and administration blocks doors wide open.

Mabona said it was not yet clear which items were stolen at the school.

The bird’s-eye view from Metro-1, the Cape Town Metro Police helicopter, makes it clear that the government’s goal of limiting the spread of Covid-19 ...
News
2 years ago

At Tsokodibane Primary School in Evaton, south of Johannesburg, all classrooms were burgled and vandalised, and cupboards were broken.

Criminals made off with heaters, wall plugs, electric cables, circuit breakers and window handles. At Beverly High School in Evaton they burgled the school’s administration block and made off with printers, computers, 14 flood lights, micro oven and school nutrition grocery.

At Dinokaneng Secondary School in Evaton they made off with 259 chairs. "At Katlego Impumelo Primary school in Orange farm, police arrested two suspects after the matter was reported at the Sebokeng Police Station. The suspects are currently in Police custody," Mabona said.

Gauteng education MEC Panyaza Lesufi called on the community to provide the police with information and urge the police to act swiftly to apprehend the perpetrators.

"These incidents are indicative of a trend to take advantage of school holidays to rob schools. In the context of the current lockdown, the department of community safety has been alerted to intervene in what seems to be a well-orchestrated criminal activity against the schools," Lesufi said.

He said valuable equipment and school nutrition groceries were stolen during the burglaries.

"Crime of this nature undermines proper functioning of schools and require collaborative effort to detect, prosecute and eliminate. All these cases have been reported to the police for investigation," he said.

Health minister Zweli Mkhize on Friday announced that the number of confirmed cases of Covid-19 in the country had risen by 43 to 1,505
News
2 years ago