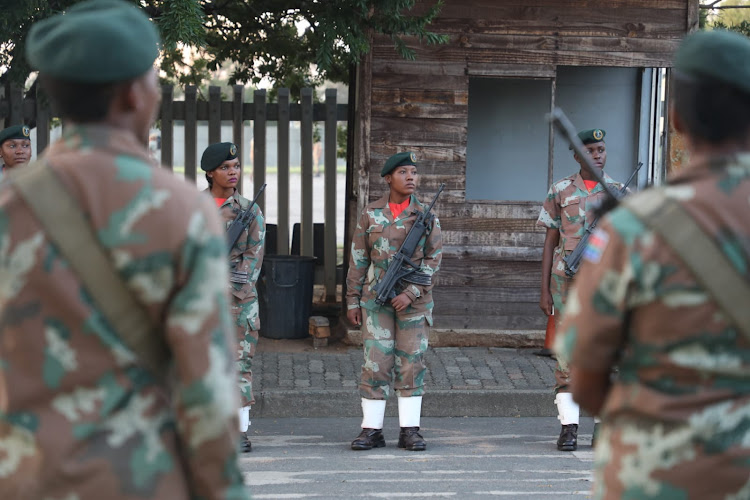 Defence force members wait for President Cyril Ramaphosa at Doornkop army base in Soweto to give them words of encouragement ahead of the national lockdown.
Image: Thulani Mbele

The president also maintained that he had “no specific knowledge” of law-enforcement officials behaving unconstitutionally.

“I have no reason to believe that they have acted unlawfully and in the event that there may be incidents of unlawful conduct on their part, such conduct must be reported to the relevant authorities,” Ramaphosa states in papers filed at the Pretoria high court on Friday afternoon.

Ramaphosa promises to clear the air on lockdown cigarette sales

Confusion over cigarette sales during the Covid-19 lockdown should end on Saturday.
News
2 years ago

Ramaphosa has also stressed that he believed the state’s shutdown was the decisive action needed to “save lives before the virus reaches proportions that would have a significant strain on our medical system and add to the social maladies our country already faces”.

“I am convinced that this extraordinary intervention will later prove to be the one intervention we adopted that averted an unprecedented calamity for our nation,” he states.

“I knew it would have a considerable impact on people’s livelihoods, on the life of our society and our economy. However, the human cost of delaying the intervention was too ghastly to contemplate”.

Two men who allegedly posed as soldiers have been arrested for the brutal murder rape and murder of a 74-year-old Pietermaritzburg woman.
News
2 years ago

While stressing that he does not take the allegations of police and defence force “abuse of power” made in an urgent court application by the Fair and Equitable Society NGO “lightly”, the president said the FES’ application “simply alleges abuse without any specificities”.

He has described the case as “misconceived”.

As of Friday afternoon, eight people had reportedly died as a consequence of law enforcement actions during the shutdown, in contrast to the seven people who had died as a result of Covid-19 itself.

These incidents are under investigation by police watchdog the Independent Police Investigative Directorate.

In court papers, Ramaphosa makes it clear that “should there be any complaint about the conduct of our security personnel, such complaints must indeed be lodged with the relevant authorities tasked with the investigation of such matters”.

He adds that he joins police minister Bheki Cele and defence minister Nosiviwe Noluthando Mapisa-Nqakula in condemning “any act of abuse that may have been committed by any of security personnel” deployed to enforce the shutdown regulations.

Using videos sources largely from social media, as well as news reports, the FES maintains there is clear evidence that police and defence force members have acted unconditionally in their enforcement of the state’s shutdown regulations.

FF+ leader can't tell police, soldiers how to do their job

The Freedom Front Plus leader got it wrong when he said the SA National Defence Force and police have to be disciplined in dealing with people ...
Opinion
2 years ago

It wants law enforcement to be interdicted from engaging in such conduct in the future and has asked the Pretoria high court to rule that “the State of Disaster as declared by the minister of co-operative governance and traditional affairs under Government Gazette No 43096 has not and does not suspend constitutional rights of all South Africans”.

In his court papers, Ramaphosa stressed that if the incidents of violence alleged by FES “have indeed occurred, they deserve condemnation” — and should be reported to Ipid.

“However, [FES] must assist us with more than just reference to unidentified culprits circulating in various media platforms,” he said.

Ramaphosa says all his cabinet ministers — including Cele and Mapisa-Nqakula — “have acted impeccably and spared no effort in defence of our citizens against the Covid-19 since the first infection was recorded.

“Where mistakes have been made in these uncharted waters, they have acted swiftly to remedy the situation and issue clear directives,” he said.

Three Cape Town law enforcement officers have been suspended for allegedly verbally abusing and harassing people on the Cape Flats during the ...
News
2 years ago

A SA National Defence Force member was injured and admitted to hospital after a military vehicle crashed in Mthatha, Eastern Cape, while trying to ...
News
2 years ago
Next Article