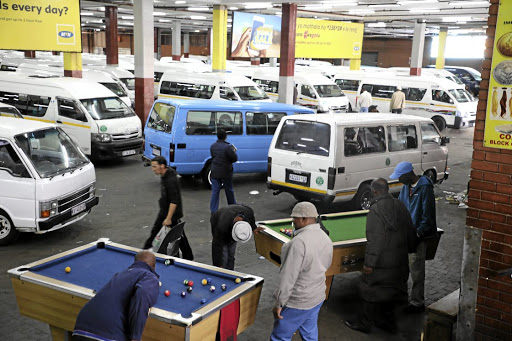 Gauteng commuters are worried that the increase in the number of passengers a taxi is allowed to load could expose them to the risk of contracting the coronavirus.

This comes after transport minister Fikile Mbalula caved to pressure by taxis associations who threatened a strike to relax regulations to allow them to carry 70% of their full capacity loads.

Mbalula initially announced that minibus taxis would be allowed to carry a full load of passengers on condition that they all wear masks but later rescinded the decision.

Thami Mugulwa, 31, who works at City Power, told Sowetan the slight increase in the number of passengers was a gamble on their lives.

He said although he understood that taxi owners needed to break even, it should not come at the cost of passengers' health and lives.

Another commuter said having 10 passengers in a taxi was risky but the economic situation compelled the taxi drivers to endanger their lives.

Ntombekhaya Xesi said: "The 10 is a lot but we don't have a choice. We are not rich to buy our own cars and we also can't afford an Uber."

A senior taxi association official in Limpopo  was killed in a hail of bullets at the weekend, a day after he opened a fraud case relating to missing ...
News
1 year ago

“The truth of the matter is that we need to keep operating if our business is to continue. The fact is that there aren't enough masks and saniters as ...
News
1 year ago

Mbalula announced the amendments after meeting with the leadership of the South African National Taxi Council and the National Taxi Alliance .

"All minibus and midi-bus taxi vehicles are permitted to load their maximum 100% loading capacity as provided for in their operating licenses, provided that all passengers are wearing masks... surgical masks or an N95 respiratory mask," Mbalula said on Tuesday.

However, the minister yesterday made an u-turn on his earlier announcement and reinstated 70% load rule.

Mbalula said the decision was taken after meeting with all stakeholders in the taxi industry.

He said some unions indicated that a taxi filled to 100% of its capacity was "risky".

"It can also be abused and be exploited, particularly if people don't have masks," said Mbalula.