An elderly Soweto businessman died after being shot when three thugs ambushed him during an armed robbery at his home.

Reginald Zwane, 78, was shot while attempting to protect his wife and helper during the robbery in Zondi on Monday. He died at the Chris Hani Baragwanath Academic Hospital on Saturday.

"It makes us angry because this was the second time these guys invaded our home," Zwane said.

"My grandfather had just returned from his shop and was about to enter the house. My grandmother and the helper were at home and were waiting for him by the door when they saw a man wearing one of these coronavirus masks. My grandma and the helper ran into one of the rooms and locked it," Zwane said.

He said the assailants went directly to a spot in the bedroom where money was kept by the old man.

Police are investigating a case of attempted murder after a 53-year-old taxi owner was attacked, robbed and shot numerous times at Mokwakwaila in ...
News
1 year ago

"They previously robbed my grandfather at gunpoint so they knew where the money was kept. But they got angry when they didn't find anything. They shot my grandfather in the stomach and in the knee, dragged him to his car and forced him to drive them out of the yard," he said.

Zwane said his grandfather was forced to drive the trio to a bush in Zondi where they jumped out of the vehicle and fled.

"We didn't know where he was, but he was able to drive himself back to the house. We took him to Bheki Mlangeni Hospital [in Jabulani] where they stabilised him and referred him to Bara where he died a few days later," he said.

He described his grandfather as a well respected businessman in Soweto who owned a shop and liquor store in White City.

"We opened a case after the first robbery and we improved security around the house. These are people who knew my grandfather and knew his movements. We just want the police to find these thugs because we want justice. We have lost a pillar in our family," he said.

"We are not the only people who lost someone we loved, the communities where he operated will miss him because he was one of them. He took care of people and helped them where he could."

Police spokesperson Cpt Mavela Masondo said they have launched a manhunt and no arrests have been made.

"We appeal with the community to come forward with any information that could lead to the arrests of the suspects," Masondo said. 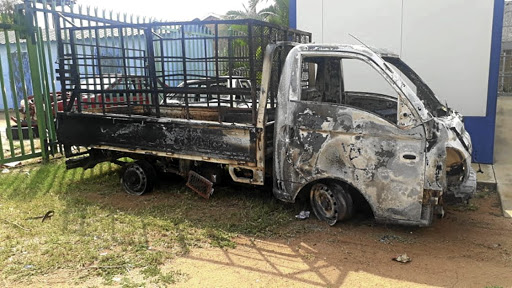 Eight people were arrested after three charred bodies were found next to a burnt truck in Limpopo.
Image: Saps

Meanwhile, Limpopo police have arrested eight people after the charred remains of three men were found in a village outside Groblersdal.

Police spokesperson Col Moatshe Ngoepe said the group were arrested in Mpheleng and Naganeng villages on Sunday. They appeared in the Mdutjana magistrate's court on Monday facing charges of kidnapping and murder.

The arrests followed after the bodies of Owen Ncube, 31, Salos Sithole, 23, and Lovemore Basera, 20, were found by a passer-by in a bush around Naganeng village in the Dennilton earlier this month.

They were burnt beyond recognition and a burnt out truck was next to them.

"It is suspected that the deceased were severely assaulted before they were burned as there were several stones found around the scene," Ngoepe said at the time.