Two grannies die while waiting in queues for grants 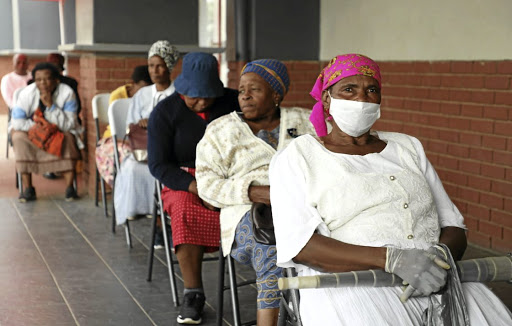 Two elderly women died while waiting in queues at a Sassa paypoints in Gauteng and KwaZulu-Natal, respectively yesterday.

"I can confirm that one person passed on today at Pimville, Soweto while waiting in a queue and another person passed on in Hammarsdale, KwaZulu-Natal. We will not release their names yet, but we have their details so we will wait to report to the families. We regret that they passed away at a critical time in our country and our condolences go out to their families," Zulu said.

An elderly woman has died while waiting in a queue at a Sassa pay point in Soweto on Monday morning.
News
2 years ago

"We are not investigating the matter because the lady passed on from natural causes. She collapsed and the paramedics were called. They arrived and confirmed that it was as a result of natural causes," Masondo said.

Sassa's spokesperson Paseka Letsatsi confirmed the matter, but said he could not provide further details as they were still processing information pertaining to what transpired.

Their deaths come as thousands of elderly and disabled persons were urged by the department to collect the grants early in a bid to contain the spread of Covid-19.

Other grants, including child support, will be collected from Wednesday.

At least 17 million beneficiaries in SA travelled and spent hours in queues for their payments.

Government said it had taken the necessary measures to reduce congestion and ensure there was social distancing protocols at pay points.

On Sunday, acting MEC for social development Panyaza Lesufi confirmed more than 700,000 elderly and disabled residents in the province would receive social grants over the next two days.

Nervous Durban pensioners come out in droves to collect their grants

Durban pensioner Beauty Bungane "forced" herself to collect her social grant on Monday because she had no food to feed her family.
News
2 years ago

Meanwhile, in Jabulani Mall also in Soweto, Elizabeth Zulu sat on the side of a long queue that led to the social grant pay point.

The 65-year-old mother of three was one of thousands of elderly and persons living with disabilities who flocked to the post offices to collect their monthly government grants.

Sassa announced it would provide early payment of social grants for the month of April by two days in an effort to lower the risk of Covid-19 infections.

"I have no choice, but to collect my money today. I heard that we need to collect our money today or tomorrow [today], but I decided to come today so that I can buy groceries," Zulu said.

"I came here without my children or grandchildren because they said they didn't want to risk their health by leaving the house. They are scared of the virus, but said I should collect my money."

Zulu said after collecting her grant, she would proceed to another long queue that leads to Shoprite to buy grocery.

All major shops that have been permitted to operate during the national 21-day lockdown due to providing essential services have remained open by using social distancing and limiting the number of customers inside their stores.

Nomasonto Tshabalala was worried that the chances of contracting the virus while waiting in the queue was higher because of the number of people at the mall.

"Of course I am worried, I don't have a mask or gloves and the only place where social distancing is being practiced is closer to the post office," Tshabalala said.

She was referring to the spread out chairs placed closer to the post office's entrance while sanitisers were also used before beneficiaries entered the paypoint.

A post office official, who cannot be named because she is not authorised to speak to the media, told Sowetan she was worried that they were susceptible to contracting the virus due to the large numbers of people gathered to collect their grants.

"What can we do though? We understand that this is a problem facing all South Africans and we have to do what we can to alleviate the problem facing the less advantaged people in our society. We have a role to play to our communities, now more than ever," she said.

The payout of Sassa grants for pensioners and the disabled has temporarily come to a halt on Monday morning as the post office at the Diepsloot Mall ...
News
2 years ago

More than 1,000 arrests in one day for contravening lockdown laws

More than 1,000 people were arrested in South Africa on one day for not complying with regulations relating to the national lockdown
News
2 years ago
Next Article