'It was time': family of Soweto gogo who died before collecting grant 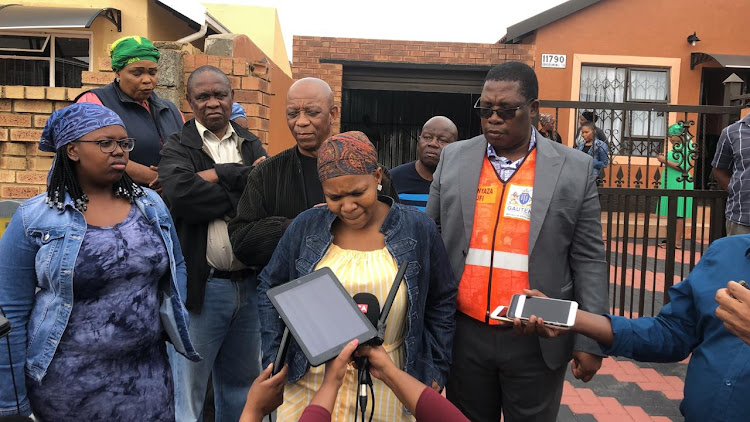 The family of an elderly woman who collapsed and died moments before collecting her pension grant payout on Tuesday in Pimville, Soweto, has denied claims of negligence by the government, instead saying they believed it was her time to die.

Ellen Mbhele, 66, collapsed and died outside a post office in Zone 7 before she could join a queue leading to a pay point.

“She collapsed on her way. She was almost at the entrance. This did not [happen] because of long queues or negligence caused by anyone, it was time. It’s a pity it happened during this catastrophy of coronavirus,” said Mbhele's granddaughter Phumzile Kheswa.

Kheswa said Mbhele had been a mother to her and many others and her death left them shattered.

Kheswa was among the first people to rush to the scene where her grandmother died. She recalled the pain of witnessing people taking photographs of her lifeless body before it could be wrapped. The picture was also shared on social media.

She expressed concern at the practice, adding that the family needed counselling because the pictures were so disturbing,

"As black people, we respect the deceased," she said. "It just wants to bring me to tears."

Gauteng acting MEC for social development Panyaza Lesufi visited the family less than 24 hours after the ordeal made headlines.

“We felt obligated to come to the family, just to establish the facts,” he said.

Lesufi assured the family that Mbhele's pension payout would be given to the family.

Minister of social development Lindiwe Zulu said earlier that two pensioners had died on Monday. Lesufi confirmed that Mbhele was in fact the third pensioner to die on Monday, the first day of grant collections.

Lesufi said the department would help the three affected families with burial arrangements, counselling and groceries.

"Even though the family has explained that the incident was outside our perimeter as government, we feel obligated as the government to contribute something to the funeral arrangements," he said.

Mbhele is expected to be laid to rest on Friday.