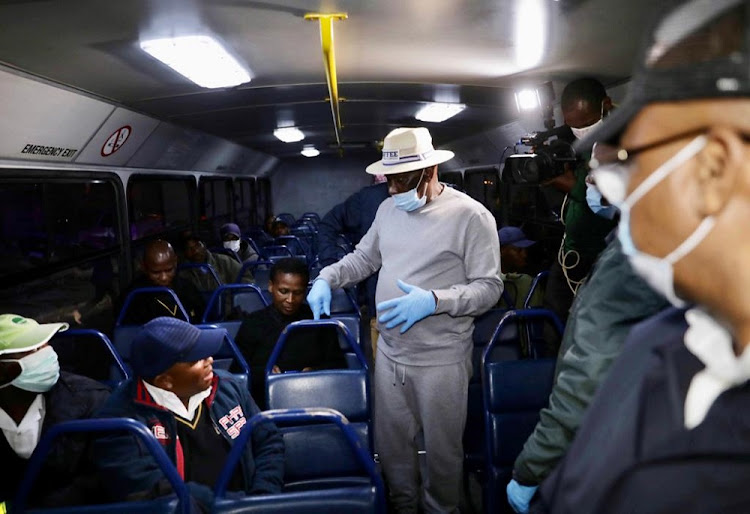 Police minister, Bheki Cele joined members of the SANDF and SAPS in Khayelitsha on March 28 2020 to help curb the spread of Covid-19. A woman has allegedly received death threats from the Khayelitsha community after testing positive with for Covid-19.
Image: Reinart Toerien

A Khayelitsha mother fears for her daughter 's life after she allegedly received death threats from her community because she is infected with for Covid-19.

Meanwhile, several people in Alexandra, were also quarantined following contact with a person who tested positive.

The woman in Khayelitsha was the first patient in the township to test positive and was allegedly stigmatised by the community and her landlord apparently kicked her out.

This was revealed by the woman's mother in a WhatsApp voicenote she shared with a women's forum.

"On the day when healthcare workers came to fetch my child, there was commotion and her landlord chased her out. She told me community members had gathered outside her place and others were busy taking pictures, maybe that could have led the landlord to panic. I don't think the community has an understanding of the virus," she said. She said her daughter and her grandchild were eventually taken to a local hospital. "I am worried about their safety, especially my grandchild as she is the one who is seriously sick at the moment.

However, in some of the incidents seen on social media, the force used by soldiers when dispersing people cannot - based on what can be seen - be ...
Opinion
2 years ago

"My daughter said even though they are isolated, no one is checking up on them and they have not eaten anything because people are scared to get closer to them."

The woman, who stays in Nyanga township, also in Cape Town, said her daughter had visited her for a week before she found out about the virus.

"I was called by the department of health, looking for my address and date of birth and they promised to bring package of precautions. I stay with three other children in a two bedroom house who were also in contact with my daughter.

"However health officials told me to sleep in my own bedroom and wear a mask when I am cooking," she said. Western Cape premier's spokesperson Bianca Capazorio said the provincial government was aware of a message circulating false information.

"The patient has been receiving appropriate care, and has had access to in-hospital facilities such as catering. This was a temporary measure while appropriate isolation facilities were sought. Our contact tracing teams have already conducted follow-up and screenings of close contacts and have also done community screenings," Capazorio said.

The Gauteng department of health has confirmed a case of Covid-19 in Alex. Spokesperson Kwara Kekana said: "The department can confirm that there are five people who are currently under quarantine after being in close contact with a confirmed case.

"The confirmed case, tested and was instructed to remain under self-isolation. Upon positive confirmation of results, our team of tracers working with law enforcement tracked the confirmed case to Limpopo.

"He had disregarded an instruction and travelled outside of the province last week before the lockdown. He is currently under isolation in a health facility in Limpopo."

Western Cape premier Alan Winde said on Sunday that the province had recorded 310 Covid-19 infections as of Sunday and most fell within the city of ...
News
2 years ago

As the number of people who have contracted Covid-19 increases, let's us be reminded that there is no cure or vaccine for the disease. Anyone
Opinion
2 years ago

The main road which runs for several kilometres through Cape Town’s southern suburbs is normally abuzz with activity which ebbs and flows at ...
News
2 years ago
Next Article