'Crowded shelters no better than streets' 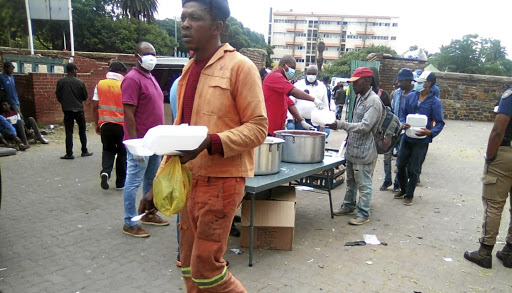 Poor hygiene and social distancing not adhered to at Caledonia stadium, a home for hundreds of homeless people in Tshwane. /Thomo Nkgadima

About 1,800 homeless people in Pretoria have been placed in overcrowded tents erected at the Caledonian Stadium for the duration of the national lockdown.

Sowetan visited the temporary shelter in the heart of the city yesterday, where the Tshwane metro police officers had their hands full, trying to keep order as people queued up for food.

Social distancing, which the government has been preaching, is also impossible to be adhered to as the jostling for spots in the front of the queue continued unabated.

They also share one water tap for drinking, with bathing seemingly a luxury to them but many aren't worried about.

Elliot Rampa, 33, one of the homeless people at the shelter, said their living conditions were horrible.

"They don't want to separate smokers from nonsmokers and those who are using drugs become aggressive when they don't get their fix and they end up robbing us of our blankets and food to sell," Rampa said.

Sanele Tsengwa, 34, who identified himself as a team leader of the homeless, said it was better living in the streets and scavenging for food in the rubbish bins for survival.

"Sometimes not all of us get food, and blankets are not provided for everyone," Tsengwa said.

"We are grateful of the willingness to help, but we don't have sanitisers and social distancing is not observed and it's impossible to be adhered to."

Tsengwa said they were also un able to bath as the current arrangements didn't allow for that to happen.

Homeless man OK with school lockdown but worried about his 'habit'

As the Gauteng provincial government prepares to place thousands of homeless people in shelters across the province for the lockdown period, Ben ...
News
2 years ago

"We fear that if the virus can infect one of us here, the outbreak will result in a big disaster," Tsengwa said.

Gauteng premier David Makhura visited the area on Saturday and promised that more resources would be made available to the homeless, mainly using school infrastructure in the area.

"In the meantime, waste management does daily cleaning, people sanitise and NGOs are conducting awareness regularly."

Bokaba said everyone housed at Caledonian Stadium was given blankets, mattresse and tissues on Saturday.

Residents in Orlando were left infuriated after a group of homeless people  were "dumped" there without adequate food and security.
News
2 years ago

The City of Tshwane has announced four locations where homeless people will be relocated to during the national lockdown.
News
2 years ago

'I'm trying to save lives... This is not the time to ask nicely,' says cop
News
2 years ago
Next Article