Evacuees tell of sleepless nights and fear of dying in China 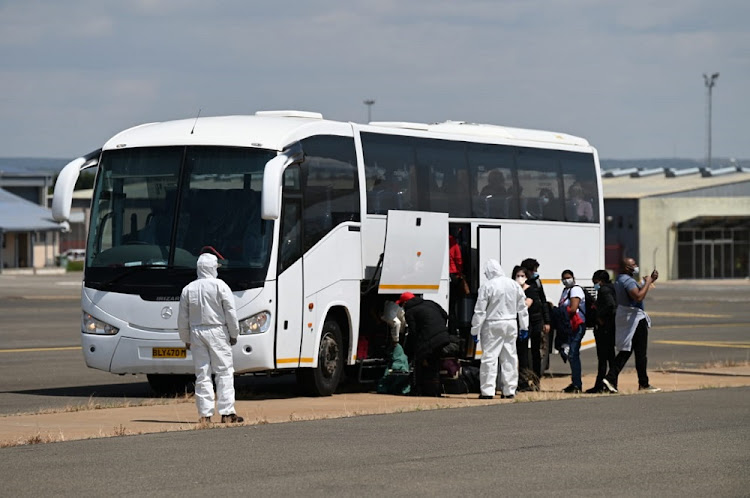 Evacuees tell of sleepless nights and fear of dying in China.
Image: Courtesy of Moleli Molefe Limpopo Office of the Premier

South Africans repatriated from Wuhan, the epicentre of the coronavirus pandemic in China, have spoken of their sleepless nights, fear of dying and starving while abroad.

Mphetha Motaung said they strongly believed they were going to die and their wish was not to die on foreign soil.

Bongiwe Dinyane from the Eastern Cape shared a moving speech yesterday as the repatriated group was preparing to be released into a national lockdown, having tested negative for Covid-19 after spending 14 days in quarantine at The Ranch resort in Limpopo.

"After being in quarantine and lockdown for 51 days in a foreign country, away from loved ones, feeling devastated, not allowed to go outside, you start to skip meals because you are afraid to run out of food," said Dinyane.

“You are, as the premier said, going to be those people whose names are going to be clearly written in the history our country, because this is ...
News
2 years ago

"You wave goodbye to each and every flight that you see because you are wishing that you can be there too," she said in a trembling voice.

"But somebody remembered us. You didn't just evacuate us but you also [brought hope] to our families, especially our parents, who had sleepless nights and lost appetite."

Teenager Lukiwe Kenyane, also from the Eastern Cape, was among the group that was released from the hotel south of Polokwaned yesterday.

She was among the 114 South Africans who were evacuated from the coronavirus epicentre in Wuhan City, China over two weeks ago. Of the 114 in the group, 29 were from Gauteng, 44 from Free State, 11 from Western Cape, seven from KwaZulu-Natal, four from the Eastern Cape, two from North West, seven from Mpumalanga and another seven from Limpopo.

Teboho Sehloho, 26, from Kroonstad in the Free State, said he would do his best to make sure his message reached out to rural communities, where there is little knowledge about the virus or where information is disregarded.

"I'm worried that our people take the virus for granted and is the most dangerous one. I have seen people dying in China," he said.

"Many people in the rural areas [in SA] still don't know much about Covid-19 and its effects. I urge communities to follow messages and guidelines from our government."

Jabulile Milo, 24, who was teaching English in China, said she was happy that she would be going home to join her family in Soweto.

"I'm happy that we are finally going home and I'm coronavirus-free," she said.

"It was not easy because at first people called us names and said we were transmitting the virus to the people of Limpopo, which has proven not to be true."

President Cyril Ramaphosa said he was glad that they had not contracted the virus.

"If we ever had evangelists of a lockdown, you are our best evangelists. I am sorry you are going into another lockdown," Ramaphosa said.

"For you it's been 51 days [in China], 14 days [at The Ranch] and now another 18 days. I am sorry but you are the best campaigners for a lockdown. You have seen that a lockdown does work."

The group were repatriated in a military operation headed by the SANDF, in collaboration with the health department and the South African Airways, ...
News
2 years ago

The number of so-called "imported" cases also fell from 54 on the previous day, data from the National Health Commission showed.
News
2 years ago
Next Article