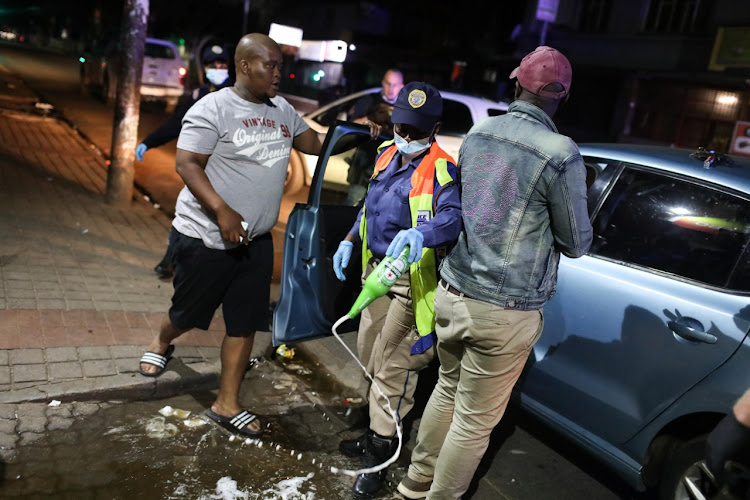 Law enforcement officials confiscate and pour alcohol onto a street in Johannesburg at the start of lockdown.
Image: Alaister Russell/The Sunday Times

An Ekurhuleni metro police department (EMPD) officer and a second man have been arrested in connection with a deadly shooting incident during a lockdown enforcement operation in Vosloorus on Sunday.

He said community members attacked officers when they attempted to make an arrest.

“In retaliation the police then discharged rubber bullets. It is further alleged that the deceased was followed up to his veranda where he was fatally shot.”

Sibusiso Amos, 40, was declared dead on the scene.

Four children aged five, six and twins of 11 were shot and injured. They were transported to hospital.

“Ipid investigators attended the scene and went back ... this morning to continue with investigation.”

Seisa said two men, a 34-year-old EMPD officer and a “45-year old civilian person who is believed to be a private security officer” were arrested on Sunday evening and charged with attempted murder and murder.

They are expected to appear in the Boksburg Regional Court on Tuesday.

A 40-year-old Vosloorus man was allegedly gunned down in his yard, leaving four children who were caught in the cross-fire hospitalised.
News
2 years ago