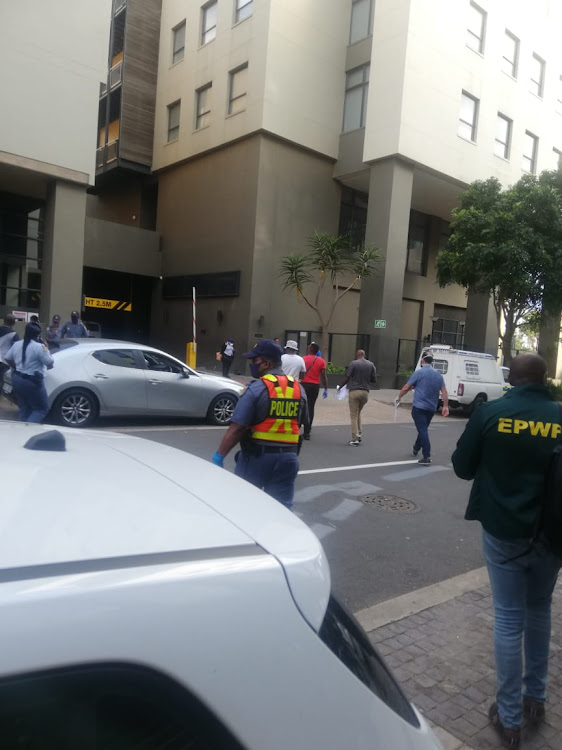 Workers were evacuated from CCI South Africa, a call centre in Umhlanga, after complaints about unsafe working conditions during the lockdown.
Image: Supplied

An international call centre based in South Africa has caught the ire of trade union Cosatu and the KwaZulu-Natal department of economic development, tourism and environmental affairs for allegedly forcing workers to continue working during the national lockdown and threatening pay cuts for those who refuse.

On Monday Cosatu officials together with economic department officials met CCI South Africa representatives and employees before staff were evacuated from the premises in Umhlanga.

Cosatu KZN secretary Edwin Mkhize told TimesLIVE on Monday that because of the high volume of calls received from employees of the company since Friday, the union decided to pay a visit to its building, despite its employees not being members of the labour federation.

"CCI has a history of exploiting workers. First, we went through the building and none of the people there are essential workers. They are not supposed to be at work," he said.

Mkhize also told TimesLIVE that workers were only given masks and gloves and social distancing enforced only once Cosatu officials arrived.

"Workers were told to come to work or take unpaid leave. We have since established that the employer has deducted monies from salaries, in anticipation of workers taking leave before they can even get their salaries," he said.

He said the company should not be in operation and the workers should be paid for the 21 days of lockdown.

"We also demand that money deducted from salaries be put back and that the unpaid compulsory leave be put to an end."

CCI did not respond to queries.

The Independent Police Investigative Directorate Ipid said it had been inundated with "abusive and unacceptable calls" to staff since the start of ...
News
1 year ago

All courts, except the Constitutional Court and other superior courts currently in recess, will operate on a limited basis to deal with urgent ...
News
1 year ago

Workers who spoke to SowetanLIVE's sister publication TimesLIVE on condition of anonymity said they were relieved that the department of economic development had closed the company's doors after they were allegedly forced to lie about being essential-service workers.

According to one employee, who did not want to be named, they were told to lie to authorities and say they worked at a network service provider that was given essential- service status.

"I obviously did not got back to work because I didn't know how lawful or legal what they are doing is, so I stayed at home because I was not going to risk my life," said the employee.

In a WhatsApp message sent to employees, seen by TimesLIVE, they are given strict instructions to not mention the company's name if they are stopped at roadblocks en route to work and once at work, to park where they would not be visible.

The employee said communication from the company had not been clear.

"Ever since the lockdown, we have not received one full, comprehensive legal statement from the company as to how we will be treated for these 21 days in terms of pay, etc," said the employee.

Once our people come to us, you must know that the battle is on. We will fight until the demands of our people are met. We are in solidarity with the workers of the exploitive call center (CCI) currently operating illegally during this #LockdownSA. We are with you in this fight.

Another  worker said they feared for their lives working in a confined space, adding that they didn't want to be part of the company's "lies to break the law".

Economic development, tourism and environmental affairs MEC Nomusa Dube-Ncube said she had instructed officials from her department to move with speed in processing hundreds of complaints from workers across the province.

"It is disturbing to learn about workers who are forced to work in groups of more than 300 in unhygienic conditions. This is despite the fact that they are not performing essential services, as stipulated by the department of trade, industry and competition," she said.

"We have received complaints against companies that are alleged to have issued fraudulent permits to work. On the other hand, there are companies that are alleged to have obtained permits after giving false information. Consequently, some workers are forced to work in contravention of the national disaster provisions as announced by the president."

She said the department condemned business owners who exposed the province’s workforce to the virus and had partnered several bodies to "ensure that we cushion our workers and business from the negative impact of the coronavirus".

"It is important for the business community to be alive to the reality that the coronavirus has already placed a strain on the national and provincial fiscus. Workers remain our special resource that we must protect in order to ensure that [in the] post-coronavirus period we revive our economy."

Reverend Kenneth Meshoe, the leader of the African Christian Democratic Party, has tested positive for Covid-19.
News
1 year ago

Covid-19: Bloemfontein church that hosted infected guests says they were screened on arrival in SA

The Divine Restoration Church in Bloemfontein on Tuesday urged congregants who attended a prayer breakfast with international visitors to urgently ...
News
1 year ago
Next Article