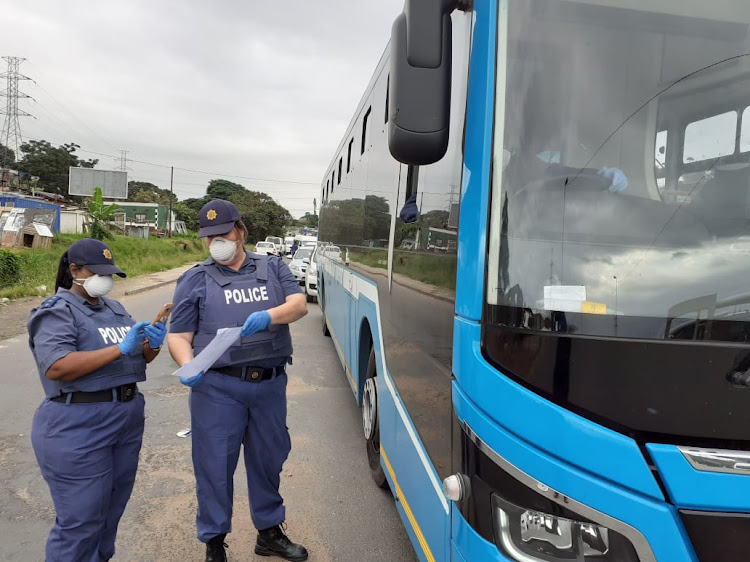 Police in Umlazi, south of Durban, inspect permits to allow essential services workers to be out on the roads during the lockdown.
Image: supplied

Durban police were out in full force on Friday to ensure the city's residents were complying with the national lockdown restrictions.

Durban metro police spokesperson Superintendent Boysie Zungu said those who were out on the streets without permits were hauled away.

"We put them in vans, warned them and then took them to other vans to make sure they went home," he said.

Durban police were out in full force on the first day of lockdown to ensure compliance with the restrictions. @TimesLIVE pic.twitter.com/OmszfeiQa6

He said Durban metro police officers were deployed throughout the city.

"There are people who are complying and who have permits. These are those who need to go to work as part of essential services. But there were also people out on the streets when they shouldn’t be," Zungu said.

He said it was too early to confirm arrest numbers.

Police spokesperson in KwaZulu-Natal Col Thembeka Mbele said officers were out working together to "ensure the lockdown is strictly adhered to".

Videos of some offenders being dealt with by police were circulating on social media.

A drive-through Covid-19 testing station opened on Thursday March 26, 2020 at the Wanderers Club Rugby Fields in Johannesburg.
News
2 years ago

As millions of South Africans stayed home on Friday- the first day of 21-day nationwide lock-down, some workers who form part of essential services ...
News
2 years ago
Next Article